How much privileged GMS Core is in the Android Stack?

The GMS Core has a ton of capabilities and doesn't seem to perform like a typical application (as in an Application living in the 'Applications' layer shown below). I would assume it would have more privileges and potentially live in the Android Framework layer or the same place as the 'Core Libraries' mention. However, I noticed a u0_a12 UID (not root or system) was attached to the com.google.android.gms process indicating that it's a user owned application. Can someone elaborate on this a little? 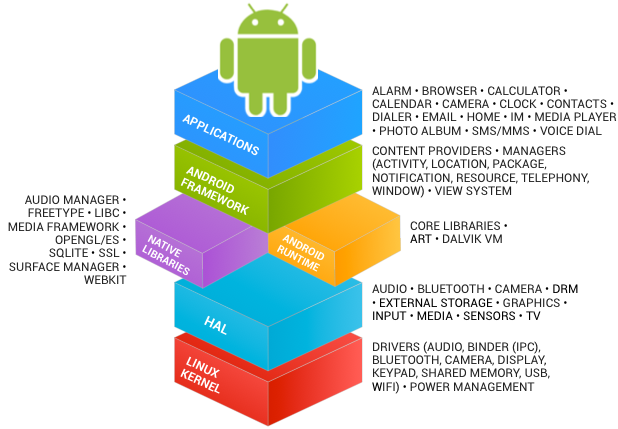 Android reserves UID range 10000 to 19999 for apps - user, system or framework. u0_a12 doesn't indicate a user owned application, it simply means UID 10012 which can be assigned to any app. On Android every app is assigned a unique non-zero UID. No app can run with root privileges, including system apps.

UID 0 (root) is the privileged user in Discretionary Access Control (DAC) but be noted that even a process running with UID 0 can be non-privileged or one with non-zero UID can be privileged. Refer to Linux capabilities, particularly Ambient Capabilities.

However Android's Java framework doesn't rely directly on DAC very much, it has its own privilege control mechanism through permissions e.g. Storage, Camera, Internet etc. Manifest permissions have different Protection Levels. Some are granted without asking user, some others require user's approval to be granted or denied and some are reserved only for system use. For more details please see this answer.

Google Mobile Services (GMS) make use of both; application layer and some features only available to framework/system/privileged apps. For instance Play Services has android.permission.INTERNET which is granted to every app that requests for it. But it also has android.permission.READ_LOGS (1) which has protection level signature|privileged and can't be granted to user installed apps. Similarly GMS Core has unrestricted internet access even in Data Saver and Battery Saver modes (2) which is also possible only for framework apps.

Not the answer you're looking for? Browse other questions tagged google-play-store google-apps .

12
Why are superuser permissions needed to acess /data partition?
8
How Android's permissions mapping with UIDs/GIDs works?
4
What happens if I ignore the warning: "If you deny this permission, basic features of your device may no longer function as intended"?
3
What is the "u#_everybody" UID?
2
How to grant an app a permission that isn't in its manifest for audio recording?
3
Can I enroll my device in Android Enterprise to install a root CA?
2
Why do Google Play Services appear to access Location despite being disallowed to?
0
how to stop google's phone app of being auto allowed to display over the apps?
0
Is there an official source of Google Play Store/Service Framework/GMS? or trustable third-party sources?
1
How is Google Play services still running after disabling?
See more linked questions

49
How can I install the Google Apps Package (Play Store, ...) on my Android device?
0
How to install app in playstore without Google playstore in android emulator
6
Fakestore, blankstore, gms, microg, unifiednlp - what's best for Android without Gapps?
0
How to install core GMS packages to use Google Play Store?
1
Huawei Honor 6X Emui 5.0 Android 7.0. Not Core GMS package problem
1
Install GMS core Packages on brand-new Huawei
2
How to choose the appearance of the Gmail app?
4
Stop GMS Firebase Indexing from collecting all of the personal data