Not enough storage on android device

When I download application from Market I obtain out of memory error.

In fact I have about 2Gb free storage on SD Card and it seems there is out of space of internal phone storage.

How to clear internal storage? E.g. remove some cache files or somewhat else?

How to obtain access to phone storage? (When I connect my android device to PC without SD card I even have no choice to connect as a disc)

I moved all application which can be moved to Android device with App2SD.

It is really annoying - I have memory of SD Card but in fact I can not use it.

Most probably your internal memory is too low.

You can't access it without rooting your device. And it won't be visible in your PC/desktop anyways with a USB connection. (it can't be mounted)

From what I understand your HTC Desire device has 512 MB of internal ROM which is used for both your stock firmware and user installed apps.

The 512 MB storage may be divided into several partitions. System partition holds your ROM (firmware) and may include apps which came per-installed when you purchased the device. 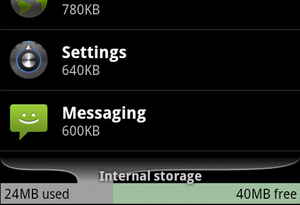 This will be the actual memory available to you. To increase this, you could try

Although there is a alternative too, which can help you move some of the apps which are by default not enabled for moving to SD Card.

Now whatever new apps you install will be installed to sd card. they will still take space on internal memory in data partition though for dalvik cache, app-cache, private-cache etc.

Note-> If you want to revert back to original use option 0 in step 4.

I have seen some weird behavior with this, apps which are set to install in SD Card by default (i.e. games like angry bird), are installed in internal. You could just move them to external though. My advice would be to use this command to enable moving to sd card and then revert back.

Clearing internal storage will probably be a temporary relief only, as it will fill-up again in (probably short) time. However, depending on the action the "temporary span" can be quite long -- so if you are afraid to root and to follow the steps recommended in the other answers, here's a list of possibilities:

While the first 2 items should be clear, some explanation on the 3rd. You can do that manually without any special app (in case you are already unable to install any) -- but it's a bit wearing:

Note that clearing cache is non-destructive, as it only removes temporary files -- while claring data is not, as it will remove all data you stored with the app, including its settings.

If you are still able to install apps, this hairy process can be eased up a lot by some little helpers like e.g. 1-Tap Cleaner or Easy Cache Cleaner.

Certainly worth rooting your phone if you feel capable and are running out of space.

On my Desire, I moved caches to SD and regularly run a cache cleaner. I also deleted lots of bloatware.

If you want to run lots of apps you have to work at it on a Desire!

It is due to an error in the OS itself. Even some simple apps could not be installed while some bigger apps could.

Reset the device to factory mode and then you must be able to install the same apps which were denied before.

Not the answer you're looking for? Browse other questions tagged htc-desire storage htc or ask your own question.

0
Samsung galaxy S2 Storage management
4
Moving app between _three_ possibilities for storage?
0
Why do I only have 304 MB of available storage space?
0
Internal Storage Running Out
0
6.5GB of internal storage is missing, how can I free it