How can I turn on google maps speedometer alerts on exceeding the speed limits?

How can I turn on google maps speedometer alerts on exceeding the speed limits?

waze has a good system , it shows your speed and puts a red circle around it if you go over the speed limit.

But I don't see it on google maps

I am in the Uk and have read that google maps has rolled out that feature for the UK.. https://www.slashgear.com/google-maps-on-screen-speedometer-will-warn-you-if-youre-speeding-06579422/ "Aside from not being available on Android Auto yet, this new Google Maps feature is rolling out to users in limited markets rather slowly. Those include Argentina, Australia, Belgium, Brazil, Canada, Czech Republic, Germany, India, the Netherlands, Poland, Portugal, Sweden, the UK, and the US. No need to update anything as it seems to be a server-side switch that only Google can flip. The on-screen speedometer is just the most recent Waze feature added to Google Maps"

I see the speedometer, just not the alert when over the speed limit.

But not on my phone

I have gone to settings..navigation setings..driver options.. and I have speedometer turned on and 'driving notifications' turned on, they were on anyway by default. But still it doesn't show me speed limit.

As a workaround I wouldn't mine an app that shows the speed limit in the corner of the screen but I don't know of such a thing either. The closest I have is Waze which has the speedometer with alerts, and I can make google maps small and sit it in the middle of a waze window. But then google maps is very small. I don't like waze that much i'd rather not have to use it just for that.

Both these apps appear to meet the requirements (not tested by me). I have requested OP to add/edit based on their tests.

• Automatically displays in any apps you choose (e.g. Google Maps)

Maps Speed Limits shows the current speed limit in Google Maps or any other app.

Looking at the screenshot below, you see on the left of the screenshot. (red circle aside), Velociraptor showing speed limit and speed.

Also on the left, you see the red circle, that's map speed limits. (not so necessary as Velociraptor shows both speed and speed limit anyway).

The speed mentioned on the very bottom is google maps saying that, google maps suddenly decided to state the speed!

They work internationally and have an option to switch between kph and mph.

Velocirapter also has quite comprehensive settings too and is pretty easy to navigate. And the google play app velociraptor page shows some screenshots of the settings it has too.

It is an overlay so google maps is open there, and any app showing the speed or speed limit is showing it as a floating overlay over it.

Here is another pic from here incase anybody doesn't believe that the above is google maps (it is). As is the pic below. And since its google maps it applies to works for whatever country you are in. 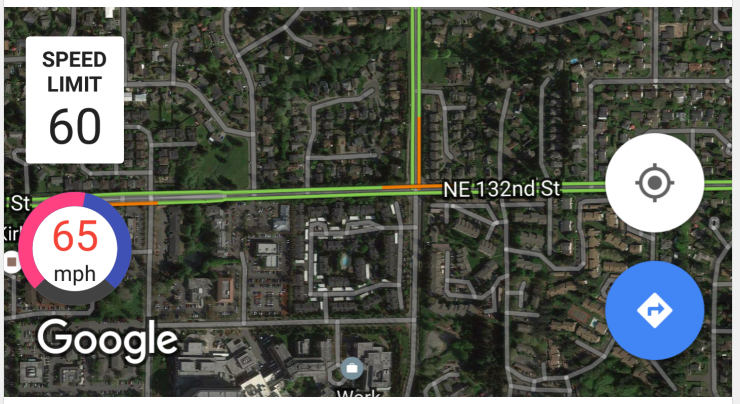 Not the answer you're looking for? Browse other questions tagged google-maps-navigation or ask your own question.

5
How to make Google Maps Navigation show forward as up?
7
Battery drains even when plugged in while using Nav app on long road trips
0
New Google Maps - how to launch quickly navigation
2
Lock screen but keep Google Maps turn-by-turn navigation and GPS active
0
How can I make navigation work again in Google Maps?
0
How to disable speed camera notifications in maps?