How to boot Ubuntu persistent live USB on Android?

I'm discovering the possibilities offered by persistent live USB using Ubuntu 19.10 and I was wondering if it would be possible to boot with Ubuntu on Android (i.e. using your computer capabilities through your smartphone) using those multi-plug USB sticks which have both USB3 and micro-USB2.

In other way: can I get some kind of a boot menu on an Android device in order to boot with a persistent live USB in order to access my Linux computer tools and setup from a wider range of devices?

Near duplicate: Is it possible to boot an Android phone from a USB drive?

You question has two parts:

1. How to boot from USB on Android device?

On most of the recent Android devices you can't boot even Android from USB, rather Ubuntu or some other OS.

PC world has a standardization. BIOS / UEFI, ACPI and discoverable buses make every PC almost identical to the OS, so we can boot any OS. BIOS lets you select boot device, loads bootsecotor / MBR and bootloader which loads OS kernel. UEFI Boot Manager is even more sophisticated, it can read filesystems and load one of multiple BLs or even Linux kernel directly from EFI System Partitions (ESP).

Phone's world has a lot of fragmentation. They are based on SoC design, so every vendor implements its own closed-source firmware. Non-enumeration-capable buses depend on Device Tree, which is stored on flash storage as blob (DTB), and loaded by final BL (like U-Boot, LittleKernel / Aboot) and Linux kernel. So SoC firmware has to bootstrap the device to BL stage so that it's able to identify hardware. 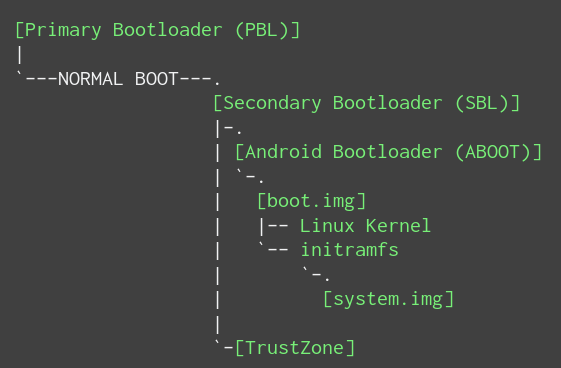 SoC firmware cannot boot from a generic MBR/VBR or filesystem, instead it has hard-coded paths to partitions containing BLs. Also the strict Chain of Trust in boot process loads only signed binaries, unlocked BL can break this chain. See Rooting Android phone without unlocking BL, VB and AVB.

However final BL allows somewhat interaction with user to boot fastboot, or Linux kernel from boot or recovery partition. Both partitions don't have filesystems, but a standard raw format as per Android specifications.

So due to small size, non-standardization, closed-source / signed nature of firmware and minimal functionality, SoC firmware + DT + Aboot setup is no way comparable to BIOS / UEFI + ACPI + GRUB setup. Functionalities like USB communication and graphical selection menus would make the BL kernel bigger than the by-design acceptable size limit. Note that "on embedded ARM platforms the core of LK is typically 15-20 KB."

However SoCs can boot from USB, particularly those used with development boards or single board PCs. See Difference between BootRom and BootLoader.

EFIDroid is a 2nd stage BL based on UEFI (EDK-II). Currently it replaces kernel in boot partition (like other multi-boot hacks), not the original BL.

But we may see (SoC firmware and/or) some (or all) BLs being replaced with UEFI and Device Tree with ACPI (particularly on ARM as it's not very unlikely). It'll make booting from USB devices on mobile phones more probable. For instance Qualcomm's Sanpdaragon 835 already has its SBL replaced with UEFI-based XBL (which also supports ACPI on Windows) and Aboot with ABL. See UEFI on ARM-V8 based Linux Embedded System.

2. How to boot Ubuntu on Android device?

On Android devices it's not possible to boot Ubuntu even from SD card or internal flash memory, rather USB.

Generic OSes like Ubuntu are not modified for a specific hardware environment. On an ACPI compliant system, after power on, OS may immediately start querying buses: "what hardware is attached to you?", which is not the case with DT based devices. See The case of UEFI for Windows on ARM.

Similarly on PCs Power Management is looked after by ACPI while on phones PMIC is usually a part of SoC - again hardware specific.

Ubuntu userspace is not compatible with Android kernel as latter is largely modified e.g. Paranoid Networking, qtaguid, USB gadgets etc. It's theoretically possible to boot Ubuntu kernel from boot.img e.g. using fastboot, or load it by Android kernel using kexec. However even bigger problem is vendor's incomplete implementations of hardware drivers in kernel, which are not part of upstream kernel source (the one used by Ubuntu). Running console login and traditional X server etc. might not be easy to achieve, see Android vs. Linux.

Android is not strictly based on UNIX's "Everything is a file" theory. Mainly due to license issues, a lot of hardware work is managed by (again) closed-source vendor specific HALs which act as bridge between Android's native/Java framework and kernel e.g. sound, graphics, RIL, fingerprint, camera, sensors and so on. Since Android 8, HIDL (based on Binder IPC) specifically separates vendor-specific binary blobs from AOSP as well as Linux kernel.

In addition to binary blobs, AOSP userspace daemons like surfaceflinger, audioserver and gatekeeperd also interface Java stack (which runs apps) on one end, and kernel or HALs on other (which interface hardware). So every hardware component is not simply a file in /dev with well documented kernel interface, instead there are layers of Android-specific IPCs and APIs between apps and hardware.

So it's not possible to boot an OS entirely from a single partition. PCs can be started if there is no storage device, but Android devices won't turn on if eMMC / UFS is damaged. Hardware-specific partitions are required at pre-kernel as well as post-kernel stages. That's why Android devices are more vulnerable to be permanently bricked.

On Android phones there is no generic Android OS, instead we have ROMs which are tightly bound to a specific hardware. So booting Ubuntu on Android device requires integrating all hardware-related vendor code in Ubuntu kernel and/or userspace.

0
Is it possible to build a linux kernel/stripped down android version for Samsung Galaxy A5 and Tab 4?
1
If both Android and Chrome OS are based on Linux, why is it not possible to install Chrome OS on an Android device?
1
Is there a safe way to install Ubuntu on my Android phone?
24
What is the boot process of an Android device?
20
What is the difference between aboot and boot?
3
Where is Boot flow screen displayed in android
4
Replacing Android OS on Android phone with Linux OS
3
How to interrupt Android boot sequence to force it boot to Linux kernel only
2
Native Linux on Android's SOCs
3
Is it possible to boot from the SD card on the HDK8150 board?
See more linked questions

21
Is there a "Linux friendly" handset manufacturer for Android phones?
2
Android chroot ubuntu - is it possible to get ubuntu to recognise usb devices
3
Can I run Ubuntu desktop x86 applications On Ubuntu For Android?
2
How to dual boot Ubuntu on Asus Eee Pad Slider (SL101)?
17
How to transfer files from an Android phone to a Ubuntu PC by using a USB cable?
1
Error setting up Android USB debugging on Ubuntu 14.10