What's causing battery drainage by "Google Services" while packet data is switched on in a 3G dead zone?

Here's a picture of my Samsung Galaxy S2 battery usage page. Around the point where the battery usage started diving, I had added a calendar remainder, sent an email (to a new contact) and browsed facebook (using their app) and twitter (using the web browser).

I've done all of these things many times before. What could have caused the sudden drain, and how can I stop it happening again when I'm not near a charger? (Updated question after picture.) 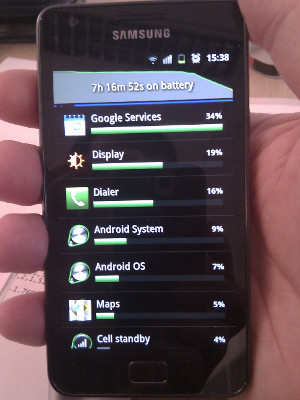 I've done some experimentation and made some observations. My workplace is in a 3G dead zone, but has 2G thanks to a repeater box someone has installed nearby.

For the past three months, I have left the phone with 'Sync' and 'Packet Data' switched on all the time. When at work inside the 3G dead zone, I sometimes switch on wifi. Before this incident, I've had no problems at all with battery power, despite leaving Sync on all the time.

After posting the original revision of this question, I charged the phone up while it was switched off, went home and only switched it back on when I got home. I had sync and 3G data all night and the battery wasn't rapidly draining.

This morning, the only change I had made was to carry it with me into my workplace and put the phone on my desk. I didn't switch anything on or off, I only carried it to my desk. It very quickly started heating up and I noticed that battery was rapidly draining as before.

I began to suspect that the dead zone was causing the problem. To test this hypothesis, I charged the phone up and switched off wifi, sync and packet data. During the day, I switched on wifi and sync in various combinations. (Text continues after picture.) 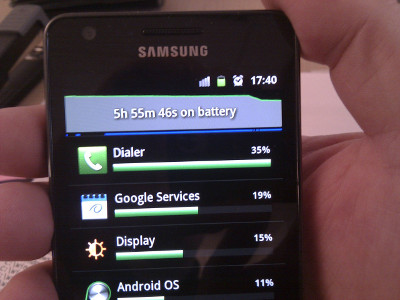 The kink in the graph is around 20 minutes where wifi and sync were both switched off, but packet data was switched on. During those 20 minutes, the phone was heating up and the battery was draining. When I switched packet data off, normal battery use resumed.

Conclusion: Something in my phone has a bug where the battery starts draining badly while in a 3G dead zone and packet data is switched on.

Remember, this only started happening very recently. I've had this phone since January and have left both packet data and sync switched on almost continuously. I've not knowingly had any software updates recenty and the 3G data availablity of my workplace has been consistently very bad for some time.

Does please anyone know of a fix?

(Many thanks to m'colleague Duncan Large for taking the pictures and helping test the hypothesis.)

It looks like your phone tries to build a 3g connection only if packet data is enabled. After all, 2g is just fine for voice and texts. But unsuccessfully trying to create a connection when there is no network costs a lot of power.

In my experience, phones normally cope just fine with that. My theory is that the 2G signal normally contains some sort of flag that indicates whether there is also a 3G signal. The 2G repeater would incorrectly send this flag -- possibly because the tower it gets its signal from sends it too. Thus your phone wastes energy trying to connect to a signal that only exists somewhere else.

If you cannot (or don't want to) replace the repeater by a more sophisticated model, you should turn off 3G altogether while in your office. GSM phones have a setting in Wireless & networks -> Mobile networks -> Network Mode that lets you switch between WDCMA (3G) and GSM (2G). I don't know what the setting looks like on a CDMA phone.

You can probably automate this with Tasker if you do want to use 3G where it is possible. Alternatively you could use a widget to change the setting manually without having to go to the settings menu. One app that provides a widget for this is Widgetsoid.

Also happened on my Samsung Infuse. It took me awhile to realize what the problem was. And also as you stated it never used to do it, only about the time the warranty expired. But yeah disabling my data while at work (which is a low signal 3g zone) fixed the problem.

I had same problem and fixed this way:

Since then, my Google services no longer consume battery as it did. I think it's because it couldn't go into sleep mode. This app allows it to go to sleep. I've been using since then and it resolved my problems.

Before this, with my Galaxy on idle, it only lasted 12 hours or so. That is without the screen on or making phone calls. It's an android bug has nothing to do with WiFi. My WiFi was always off, and still it drained all my battery.

7
Why does "Google Services" take up increasing RAM and spawn new services over time?