Way to prevent the noise when 2 phones together

In using an app, for example Wechat, to have video chats.

When the video chats started, because phones A and B, C and D are close to each other, sharp noises started to appear.

What's the way to prevent this noises in the video chats? 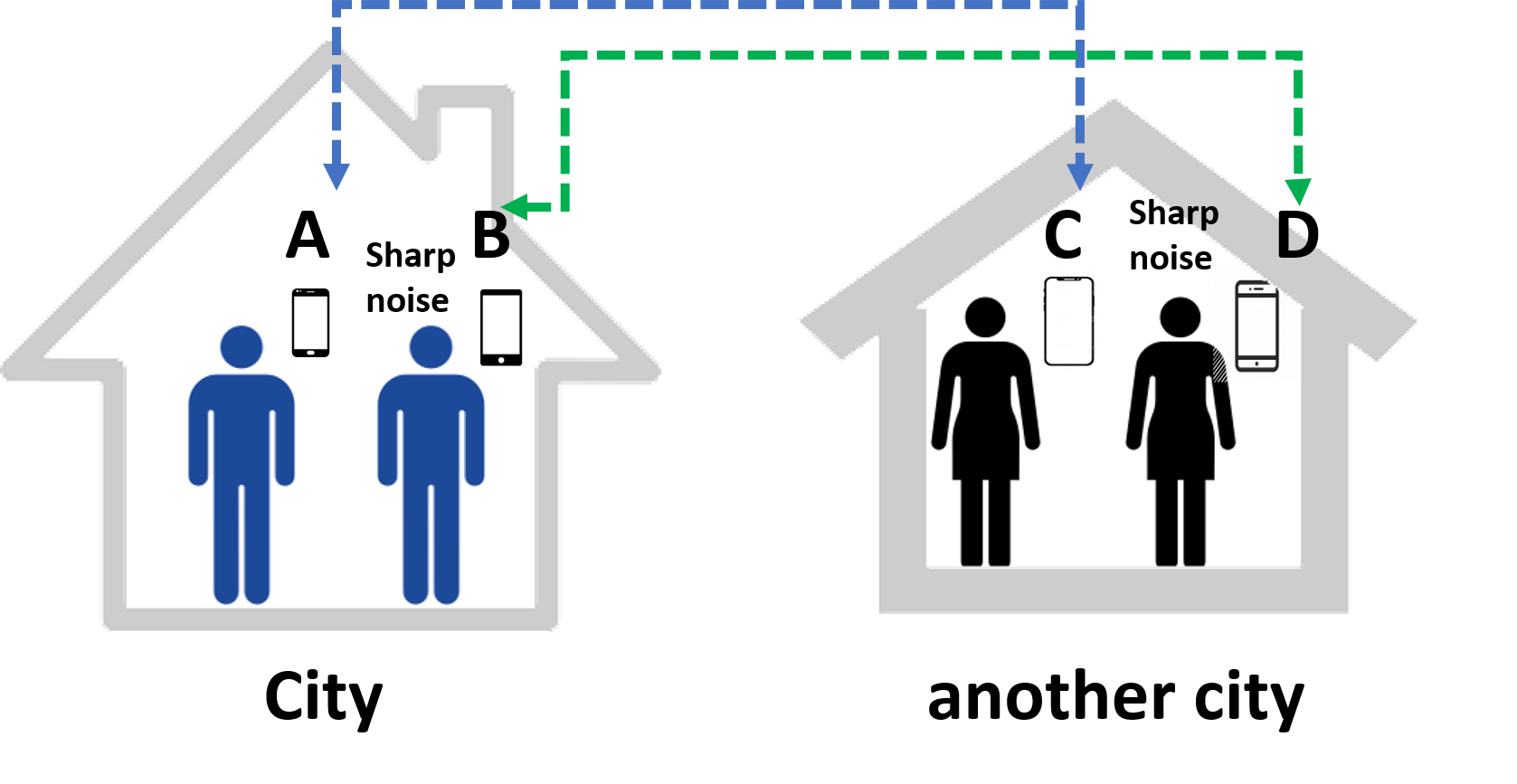 This phenomenon is called audio feedback which usually occurs when the sound from the speakers reaches back into the microphone, and then gets amplified because of the speaker-mic loop.

Common and general solutions are to cut off the loop, or at least reduce the loop gain by:

Before feedback cancellation techniques became common, such an effect would happen even with one pair of phones, e.g. phone A calling phone C. If both phones are on loudspeaker, then the signal emitted by the phone A would go into A's microphone and get transmitted to the phone C, where the same feedback between the loudspeaker and the microphone would re-transmit it back to A, etc:

This problem is prevented by subtracting the loudspeaker output signal for the microphone input. However, for such a software subtraction to work, phone A needs to know what to subtract: if A is the only phone in the room, it can subtract its own loudspeaker output, and feedback cancellation works as intended.

With a second pair of phones, feedback cancellation fails because the signal emitted by the phone A is picked up by the phone B instead. As the phone B doesn't know what signal A was emitting, it cannot subtract it from its microphone input, and sends it to phone D:

There is a second (symmetrical) feedback loop that is possible:

As you can see, the loops are closed, and there is no opportunity for the feedback cancellation software to break those.

Indeed, muting the microphones, being in separate rooms or having a single call at a time would also help, but I suppose those are not real options.

Not the answer you're looking for? Browse other questions tagged applications video chat .

10
How does android transfer with bump apps work?
15
How can I make two Android devices show the same video simultaneously?
4
What is the differrences between Talk and Google+ Messenger?
5
Video stopped recording after ~31 minutes
2
ZTE N9130: Video recorded, but doesn't show under Camera, Gallery or a Video player, though it can be seen under File manager
2
WhatsApp video doesn't play and has a warning icon (Video format h264 not supported)
1
New Phone > Videos received via Whatsapp play in Gallery but not in Whatsapp anymore