I use the standard ADW Launcher that ships with CyanogenMod 7 and have noticed a problem with the dockbar. NOTE this is the "hidden dockbar" you can reveal with a swipe, not the normal Android dock (LAB/RAB).

There is enough space for 6 icons on my dockbar but I can only add 4 before they start flowing off-screen to the right. In other words positions 1 through 4 have icons but positions 5 and 6 can't be used (first screenshot). Dragging a new icon onto them places it at position 7, which can only be revealed by scrolling the dockbar sideways (second screenshot). It's as if ADW thinks there are icons at 5 and 6 already but there aren't.

I have tried using Reset ADW in the settings but while it reset many ADW features it did not reset the dockbar, or solve the problem. 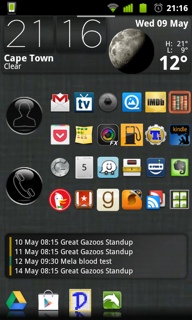 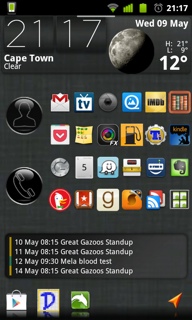 Browse other questions tagged home-screen-shortcuts adw.launcher or ask your own question.

3
Launcher disappeared, how do I restore it?
5
ADW Launcher crashing on home screen
3
lock dock icons on ADW launcher
4
How can I have 'Next homescreen' and 'Previous homescreen' buttons in ADW EX on the dockbar like LauncherPro?
1
Run a Titanium Backup schedule from ADW Launcher's drawer
5
How to rename catalog of ADW Launcher EX?
3
How do I copy ADW launcher settings from the free to the paid app version?
1
Updating ADW Launcher for Cyanogenmod 7
1
ADW lock code forgotten