I did very little to my phone before that happened:

I have only installed one new up -- FakeStandby -- as suggested here, but since this app has nothing to do with the calendar itself, I would be surprised, if that would be a source of the problem.

On a day view (not: agenda) long-pressing any event now brings no effect. Previously it caused an event box to be risen up visually above others, and moving finger around screen allowed to move event to some other hour or day. Now, drag'n'drop functionality does not exist / does nothing.

Is there any know report about some bug, bug's regression or is this a generally known problem? Or is this again my stupid phone going wako in exactly the same way during second anniversary of the moment, this problem appeared for the first time?

EDIT: From what I have learned, when Calendar becomes "locked" (no event's drag'n'drop) all items in calendar are visually more flat than usual. When functionality "returns" they again become a little bit 3D-like.

On contrary to initial believes, it was (is) FakeStandby that is causing these problems!

This app is designed to FakeStandby mode, by turning off screen, but not causing actual standby mode. This causes that all other apps are not notified about phone being in standby and continue working in background (below FakeStandby).

To achieve this, FakeStandby must be able to control all apps (at least that's what its author claims). And in order to do so, it adds itself to the "Accessibility" section of the configuration: 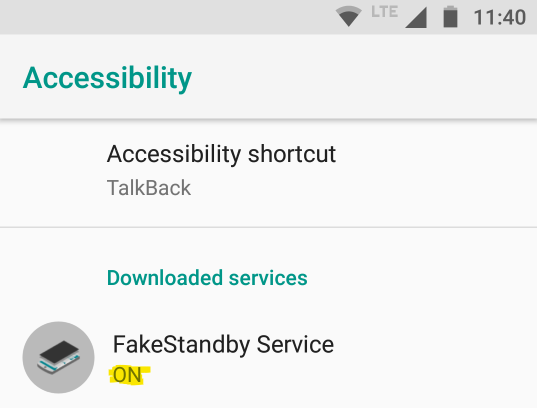 And... that's all. Having FakeStandby Service turned off causes Google Calendar application to lose / disable / turn off event's drag'n'drop functionality. Why? Unfortunately, I have no idea.

Since this is a system service, killing it with Force Stop will also automatically reset its setting in Accessibility > Downloaded Services to Off. When you run FakeStandby next time and attempt to activate it (by pressing its button on the right side of the screen) you will see a message: 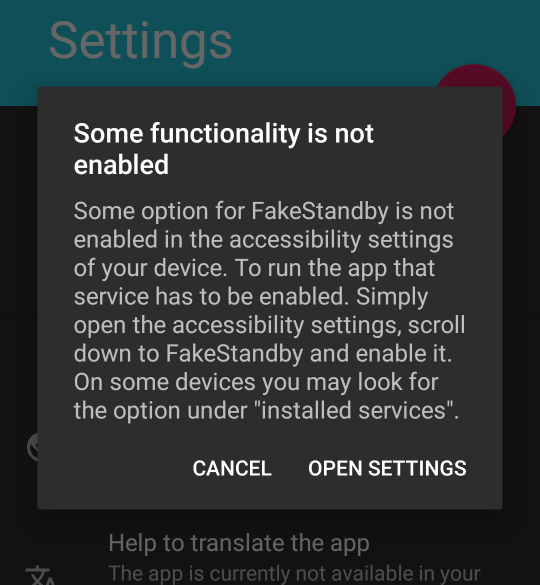 If this is too annoying for you or impractical, because you're using FakeStandby too often then I think there is no other option rather than a split decision:

I am pretty sure that this is some kind of bug in FakeStandby itself, not in Google Calendar. As I have two other apps listed in Accessibility > Downloaded Services (namely: Nova Launcher and Kaspersky Safe Kids). Both apps has their setting set to Off by default (because ability to observe screen and control other apps is used in them only in a rare, specific scenarios).

But, I have just managed to test that setting it to On for any of these two does not cause described problems with Google Calendar. So this got to be "something" in between FakeStandby and Oreo (I have no ability to test this issue in other versions of Android system).

Not the answer you're looking for? Browse other questions tagged 8.0-oreo google-calendar motorola-moto-z2-play drag-n-drop or ask your own question.

6
“Local calendar cannot sync with Google calendar…” but it can? What?
1
Calendar widget showing the wrong event dates
1
Google Calendar gone nuts since DST has ended
2
Show event names on month view in Google Calendar
16
What is the difference between a reminder and an event in Google Calendar?
0
Google calendar event reminder sound is too short and I can't hear it
1
Certain “core” apps lost access to media files
1
Is the “History” tab gone from Wikipedia after latest update?