How to cancel an announced Android System update

I wrongly click the button to book a update for Android System.

You can not cancel the update itself because it has already been applied.

The screen you show means that an update has been downloaded and installed on the non-active partition. The only step left is rebooting into the updated partition.

I am not sure if you do the reboot but not switch to the updated partition. No matter even if you would manage to do so I assume that the system would start to download and re-apply the update again on the other partition and then ask for rebooting into it to finish the update.

Edit: Even if it is too late for you I stumbled over a settings that might be helpful in similar situations:

Therefore if you have such an option and disable it while there is already a pending update plus a scheduled reboot you can cancel the update installation.

If you decide later to install the update you can do that by manually triggering it in the Android system settings. 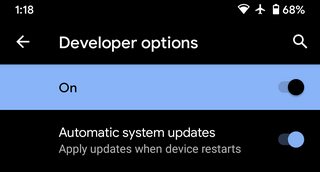 You can set the active slot to be a or b depending on which slot is currently used, from the output of the first command. For example, if you see (bootloader) current-slot:b, you set a as active instead. You can rerun the first command to verify that the change was made successfully.

Once you reboot, you will see a notification saying that the update has failed, which is what you want.

There is one simple solution to this thing, I have not experimented on Google Pixel. If the Install later option is showing then you can choose the option to stop the software from being upgraded or the download files will be present in the download folder. From thereafter file gets downloaded you can go there and delete the file before installing it.

I have done this experiment on the Samsung Galaxy Phone.

Not the answer you're looking for? Browse other questions tagged updates ota-update system android-11 or ask your own question.

2
Using NetGuard, what app(s)/service(s) can be restricted to prevent system updates?

1
Android 4.4 OTA system update hangs on Nexus 7 (2013)
1
Nexus 4 verification failed error on Update Android 4.4 KitKat
1
Duration of System Update - Nexus 4 (after download) - 4.4.2 to 4.4.3?
1
Android 5 update randomly aborted on my Nexus 4
1
System Update Downloaded
5
How can I cancel an ongoing OTA update download?
25
How do I skip an Android system update and stop its notifications?
0
Does You Android drains battery after system update?
2
I accidentally started the download/install process for the Android 11 beta, can I cancel it?