Why I don't need to provide boot-time PIN anymore?

tl;dr: I have my Motorola Moto Z2 Play / A8.0 encrypted and I was forced to provide PIN during very early boot phase of my phone. Since about 1-2 weeks ago -- when my phone had a one-time accident of very long boot -- Android stopped asking for that PIN at boot time. How can my phone be still encrypted and no longer need that PIN to decrypt itself?

About 2-3 years ago I have encrypted my Motorola Moto Z2 Play (now with Android 8.0). I used the same PIN for the encryption process, so starting from that moment, I had to use PIN three times:

About 1-2 weeks ago my phone hanged badly. After force-restarting, it needed about 20-30 minutes (!) to actually start.

From that moment on, I am no longer needed to enter PIN to decrypt phone and start Android. The first time, I now need to provide it, is when unlocking my SIM card.

My phone was not reset after that one-time very long boot accident. After it finally got up, I had everything in places: all apps, accounts, settings etc., nothing changed, reset or removed.

I have double-checked that my phone is still encrypted: 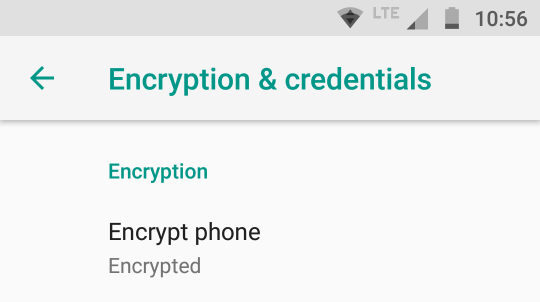 There was no system update (phone stays at Android 8.0.0 from 1+ year and probably forever), no new application installed and no change in system configuration for long months.

If the phone boots up without asking for a password, it is most likely not protected by encryption in the way you would expect. In theory, it might not be encrypted at all (...).

This answer explains that:

The best way to tell if your Android device is encrypted (and the encryption is actually in use) is to reboot it and see if it asks for a password/PIN with a prompt on a black screen that says: "To start Android, enter your PIN" (...) The lack of prompt means the master key is not encrypted".

I don't see such prompt, so I now know that my master key is not encrypted (while the file system itself seems to be encrypted -- above screenshot). But this answer does not explain how / why my master key was encrypted for 2-3 years and stopped being encrypted two weeks ago after a very long boot accident / force-reset.

So, why or when my Android 8.0.0 can decide to decrypt my master key and no longer need me to enter startup PIN to decrypt it?

In the settings where you choose a new PIN/pattern/passwords it said something like 'Because you enabled an accessibility feature you're PIN won't be used for enhanced encryption protection'.

I had to disable Lastpass auto-fill and my phone asked for my PIN at startup again.

Not the answer you're looking for? Browse other questions tagged encryption motorola-moto-z2-play .

10
Is there a way for a user to tell if their Android device is encrypted or not?
3
Difference between requiring an encrypted device password pre-boot or post-boot?

3
What is Marshmallow encryption protecting?
2
How is it that I don't need to enter my password to decrypt my phone?
1
Is it easy to remove encryption's password prompt on boot if I don't want it anymore?
0
How do I set my phone to require the storage decrypt password after restarting?
2
Encryption in Samsung Galaxy S8
2
If /system partition is never encrypted (even in "full-disk" encryption), how is it protected?
4
How to change the encryption key on (rooted) Android 9?
1
Encrypted device doesn't ask for credential on boot anymore on Android 11