I'm facing a very strange issue with the Google Photos app. Every time I copy an image with "copy to folder" (specifically not "move to folder") and then delete either the copy or the original image, both are gone.
In the trash only one image appears after that. If restored both images are back.

This is not the behavior that I natively expect. When I delete one image, I want the other one to still remain untouched in its folder.
I have searched for a solution myself, but was unsuccessful. (I only found unanswered threads like this one.)

My question is: Why is this happening and is there a way to change this behavior?

After a while of trying around, I found a solution.

This behavior of the Google Photos app seems to be intended, because it is more an interface for the network service to synchronize images, and less of a gallery app. It keeps track of exact copies and synchronizes them as one. Therefore they are deleted as one instance, even though they are stored multiple times on the device.

Nevertheless, there is a (rather hidden) function implemented that does exactly what I wanted instead.
Instead of using the trash icon... 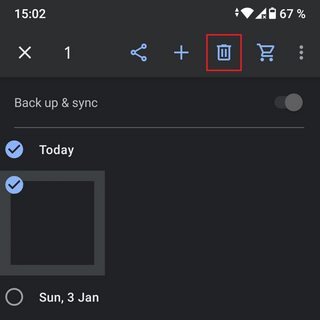 ... under the available options, when an image is selected, there is a "Delete from device" option doing the trick: 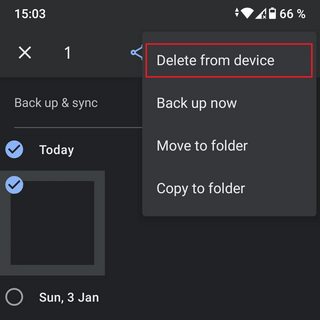 Note: With this method the image remains in the cloud even if it's removed from all synced folders.

I hope I could help someone who has encountered the same problem.

Not the answer you're looking for? Browse other questions tagged photos google-apps google-photos or ask your own question.

1
can only access SD card; cant access the internal storage on pc
1
Does deleting a photo from my android phone's gallery app also delete it from Google Photos(I have backup & sync turned on).If yes, how to prevent it

11
Confusion about photo-backups Android 4.4
3
Move photos from Android to PC wirelessly *in one step*
1
Delete original pictures/videos from phone and not have Google Photos automatically delete the online copy
2
Android phone automatically deletes photos?
1
How to transfer photos from internal storage to SD without impacting Google Photos and Dropbox?
0
Samsung S7 Downloaded Photos are Corrupt on PC but view OK from Android Gallery. Issue started after Android internal storage got all full
3
Can't delete photos from my LG X Power