Android ICS spell checker does not know how to spell (English)?

English (United Kingdom) is set as the system language and regardless of whether I set the Android spell checker to use the system language or "English" it just doesn't know how to spell. Almost everything is underlined in red! Basically, the spelling dictionary (which should be built in to Android 4) appears to be empty? The same goes for French (I have not tried the other languages).

How do I correct this?

I have not seen these Android spelling dictionaries available for download anywhere. This does appear to be the same as the Android completion dictionary - which appears above the keyboard as you type; suggesting possible words. The only suggestions that show are names from my Contacts List! (I have later realised that "fox" in the example below would seem to be part of a name in my Contacts List!) 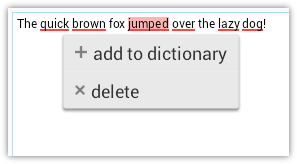 Go to the Play store, and install Google Keyboard.

This includes its own spell checking dictionary. Navigate to:

And select "Google Spell Check". You can click the settings icon to change the language too.

This appears to be a "fix" for the issue.. but it requires root to write to /system/app. I don't want to root my device just to get a standard feature.

I had exactly the same problem - only words from Contacts shown on spellcheck line. I downloaded Google Keyboard and altered Settings as suggested but it didn't make any difference. However, when I ran Google Keyboard from the icon and selected "use Google Keyboard", everything magically started working. This post was corrected throughout 100% correctly. Hurrah!

then uncheck the box.

Just found that if you go into Android keyboard settings, Add-on dictionaries you can select and download an English dictionary there.

Not the answer you're looking for? Browse other questions tagged dictionary spell-check .