This would be the most ridiculous brick I've encountered 😄

What I did:
Having enabled Developer options, I tried setting cibarA [XB] (Arabic when reversed) as my main language. 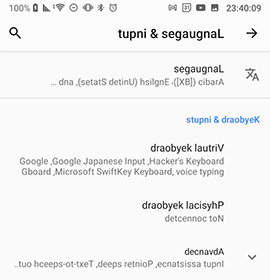 As I figured out now, this should be a pseudolocale.
Since not everything was reversed, I thought a restart might make even more things reversed, but it actually made my phone not able to boot (properly) after that.

Current state:
On startup, it shows the Sony logo (as usual), then a black screen with tools icon for a while (also usual), then animated Xperia logo (also usual), but after that, the animation gets stuck and remains like that. When I press the power button the screen goes black and the phone is in a kind of semi-turned-on state. Pressing the button again lights up the black screen for like half a second, the green led indicator of charging also seem to brighten a bit during the time. When I hold down the power button I get a reduced power menu:

I tried to hold down the Power down option to boot into Safe mode, which it did, but I ended up in the same situation, except that there is "edom efaS" written down there on that black screen :D.

I tried searching a bit, but could not find anything for such a specific case. I thought maybe using ADB (although im a noob in that) could help, but I found this post which says I would need root. Which reminds me:

My device:
Sony Xperia XZ1, non-rooted, latest official firmware, from EU (Czechia), developer options enabled, with USB debugging hopefully allowed for my PC in the past?.
I hope this is sufficient, since I cant get into the system to check for details.

Ill be glad for any tips or guides on what I can do or which you can point me to. I use my phone quite a lot on a daily basis with important stuff on it. I should be able to grasp technical terms (am an IT student), altough I havent done much Android experiments myself except rooting my older Z1 Compact a few years ago. Thanks!

47
What are the known Android keypad commands (dialer codes)?