I'm using a Galaxy S7 with Android 8.0.0 on Verizon. I'm asking about something that happened a while back when I synced this phone with my older S5. (Though if I'm not mistaken, it was there on the old one, just less of it.)

I've searched the internet for at least an hour and found nothing relevant.

When I am editing a phone contact, many of them--mostly my oldest ones--show multiple tabs labeled "PHONE." Usually, each tab has at least some of the same numbers, sometimes the same numbers, but sometimes different numbers. For example, here is a screen shot of one. There is also a "Verizon Cloud" tab that isn't visible in the screen shot, but I think I understand how that one works. 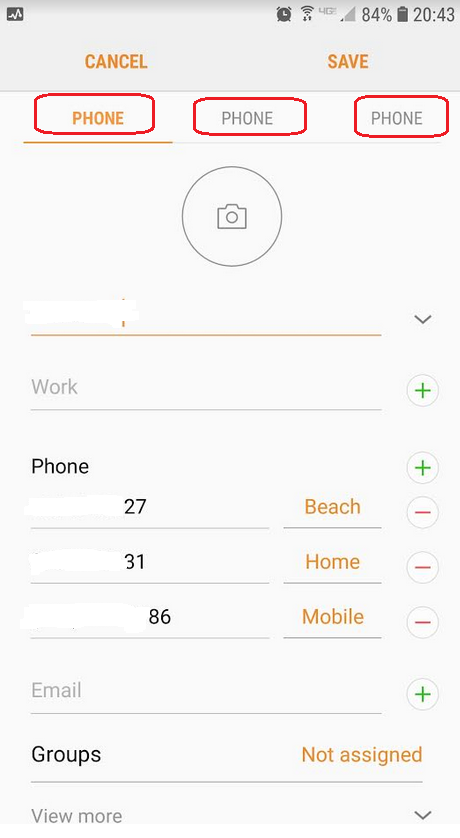 My questions are (1) why is this happening, (2) what can I do about it now that it has happened, and (3) how can I prevent it from happening in the future?

Thanks for any insights.

Browse other questions tagged contacts or ask your own question.

7
Live folders for Contact groups?
19
How can I set a default contact for a phone number?
4
Add Google calendar reminder numbers as one contact
7
Incorrect Phone labels for Google+ contacts
0
How to pick the desired contact/contact image when dialing a number shared by two (or more) contacts
10
Exact same contact shown twice
5
Disable (dead) phone number? Retaining for historical benefit. Is this possible, how can I request this feature?
0
Wrong phone number for contacts are shown and called
1
Repeated "Tabs" when editing contacts
1
How to remove duplicate phone numbers within one Android contact