How to backup the Android calendar file (is there such a file)?

Does anybody know which files I need to save in order to have a simple backup?

Reason for my question is, that my Galaxy Android smartphone lost all calendar data without any interaction. I found tons of apps, tons of sync stuff, but NO simple list of files to save. I do NOT want to save my data remotely on Google.

There must be at least one local file (database?) on my phone containing the synced calendar file (on my server, using ICSSync)

Android stores calender data (and contacts as well) into a SQLite database in the system. The format of that SQLite database differs between ROMs -- so at least for "normal users" it's not that good an idea to "simply" copy that SQLite file. Rather use a good backup app for this. A good example would be iCal Import/Export, which allows you to export your calendar to an .ics file -- and also to import from .ics files, e.g. for a restore. 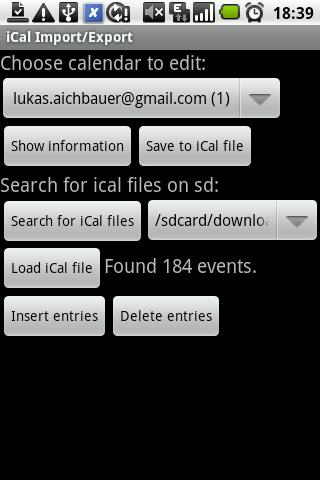 This is just an example. As especially on Google Play apps happen to be unlisted, please refer to my continuously updated app list for existing solutions.

The app Mark mentions iCal Import/Export, has been forked and development restarted. The fork is called Calendar Import/Export (ics) and is available on the Play Store and on F-Droid. New features and a cleaner UI have already been implemented.

The app is FLOSS and development happens on GitHub, if anyone wishes to contribute.

Unfortunately, iCal Import/Export doesn't work on all Droid phones/OS versions. It's unclear why this is the case, but when I try to run it on my phone (HTC Rezound, Android 4.0.3) the app's initial screen displays for a brief fraction of a second, and then it reports, "Unfortunately, iCal Import/Export has stopped." Reviews on various webpages (e.g. http://www.androlib.com/android.application-comment.at-aichbauer-ical-qjjAD.aspx?p=2) are all either 5-stars or 1-star. People who can get the program to run on their phone love it. Virtually everybody who rated it 1-star got the same error I got, and could never get it to run.

When you go to the Google Play Store to download it, the app's author has put the following in the Description section, "Attention The application is currently NOT under development because of lack of spare time. The license is open source, so feel free to fork the app, or work as a contributor. Just write a mail to me!"

The evidence suggests that this is a pretty good program in search of a maintainer, and that it probably ran into some incompatibilities in later versions of Android that would be fixed if someone volunteered to maintain it.

Not the answer you're looking for? Browse other questions tagged calendar backup or ask your own question.

0
how to take a backup of my calender events in galaxy ace duos
6
"Local calendar cannot sync with Google calendar..." but it can? What?
1
How to extract calendar data from the stock calendar app of Android Gingerbread (2.3.6) without a Google account?