Where can I find out when I installed an app?

Or should I be looking where apps are installed on the phone for time/date stamps?

TitaniumBackup also displays this when you go to the batch (backup/restore) tab. You can have it sort your apps by date of installation, name, size and so on.

It should be noted that you need to root your phone to do so.

There are many third-party apps which shows the install and update time of the installed apps. I've tested three of them and have given instructions to use them for the task at hand.

If you click on an app entry there you can also see its Installer name in the App Info (scroll down to the bottom) section.

Install and launch the app → tap your app's entry.

Install and launch the app → from the left sidebar select Applications → User apps → tap on your app's entry.

(Click an image to enlarge it; order of images: Applications Info, and Solid Explorer) 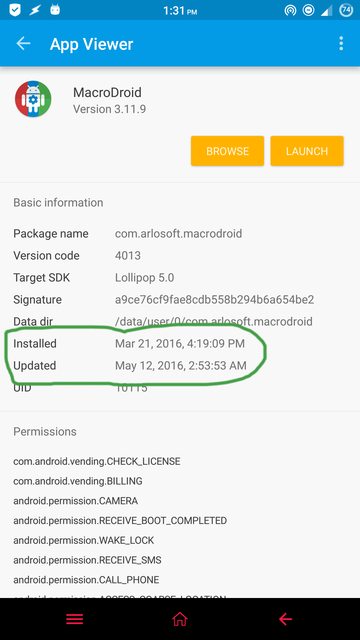 If you want a command-line way, follow these instructions:

Setup adb in PC and execute the command:

You might end up with overwhelming information about all the installed packages including the date/time stamp you're seeking. If you want the said stamps for a specific package whose package name you're aware of, then enter:

Note that the info is originally available in the file /data/system/packages.xml.

Alternatively, if you've Google Play Store installed, then take its backup using ADB, extract the backup to locate the database localappstate.db. Open that file in PC using an SQLite database viewer like DB Browser for SQLite or on Android using apps like SQLite Editor / aSQLiteManager. The said apps may need root access so I recommend to stick with the SQLite viewer for PC.

The table appstate in that file has the columns first_download_ms delivery_data_timestamp_ms. The latter shows when the app was installed and the former shows when the download was initiated by Play Store.

I didn't find a place in the stock-system which tells this. But there are useful tools around like AppMonster which display this information along (besides, AppMonster allows you to backup your apps, and in the Pro-Version even does so automatically on install as well as update -- so you can revert to a previously installed version easily in case of trouble with an update).

Not the answer you're looking for? Browse other questions tagged applications google-play-store or ask your own question.

353
How to fully backup non-rooted devices?
141
How do you extract an App's data from a full backup made through "adb backup"?
114
View app's full package name?
11
How to get the installation date and time of application?
5
History of installed/uninstalled apps
0
How do I identify on when was an application installed previously. Currently I don’t have the app on my android device
0
Apps recently changed, without an update from the store
0
Find Exact Install Date of A FREE App From The PlayStore On A Older Phone
0
How can I view history of application updates/installations?

1
Where did my purchased Apps go when I upgraded my Phone?
1
Specific App install from Google Play fails, where to see log?
7
List of purchased apps and app install/uninstall history log anywhere?
0
Where can I find my App Folder when connected to Computer?
5
How to identify installed apps where I participate as beta tester
4
Android - Check whether an app was sideloaded or installed via play store