When I purchased my second and third devices (Samsung Galaxy Tab 10.1 and an Asus Transformer Pad TF300T), I found that after I logged into my Google account during my device setup, my devices downloaded all my known wifi hotspots and the network passwords to them, and could immediately connect to any private wifi network that had been saved on my first Android device (An HTC Nexus One).

However, for some reason, this didn't happen on my Galaxy Nexus when I set it up. In fact, when I set up my Transformer Pad, not only did it download my wifi settings, but it also automatically downloaded the apps I had installed on my other devices. My new Galaxy Nexus didn't do that either. I know I checked the box to 'restore backup from Google account' when I set up the device. I did have some trouble logging in at first, so maybe that's the reason?

I'd really like to get my wifi network settings downloaded to this device. I have dozens of hotspots from friend's houses, client's offices, etc, that I don't want to have to re-enter the information for. Is there some way to manually restore this information to my Galaxy Nexus since it wasn't restored during my initial setup? I tried removing my Google account from the device and re-adding it, but that didn't work. Thanks in advance for any suggestions.

I found this page on Google's support site which states the following about restoring your phone's settings during the initial setup:

"Important: If you want to restore your settings, you must do that now during setup. You can’t restore data after setup is complete."

Based on this, I'm guessing there's no way to restore my account data at this point, short of doing a factory reset on the phone and starting over (undesirable at this point). I'd love to be wrong though.

It is possible to recover Android settings through bmgr.

Now you can restore com.android.proviers.settings with the set you want:

If your previous device was setup to backup your personal data such as WiFi passwords, Browser bookmarks, User dictionary, a list of installed Market applications and other customized settings, all is backed up to Google's servers.

The Automatic restore feature must be Enabled to allow your phone to contact Google's servers an retrieve the previous backup data. 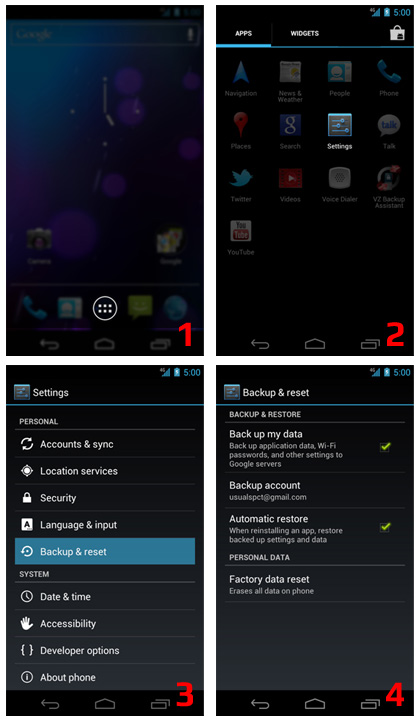 Not the answer you're looking for? Browse other questions tagged wi-fi backup restore google-backup or ask your own question.

0
where android backup its data?

54
Google Backup: Multiple devices using the same account - what happens on Restore?
4
How can I disconnect a phone from Google's data backup service?
1
How do I get my Samsung S5 to maintain a stable wifi network connection?
0
Can I globally set all Android apps to prefer WiFi for data?
4
Android Backup manager - restore from Nougat to Marshmallow
0
How does Nokia automatic backup work on the new Android One devices?
2
Backup not listed to restore from on new Android device