Backup my Android without my Apps, Settings, Config's, etc.

As the title states,

Is there a way I can backup my phone, without including all the extras, that I would just prefer to pick and choose to install later.

feel free to read the whole thing, or just read the bold as the bold summarizes most of what I am looking for. As well as the bottom explaining my device & set up.

The best method I would think of, to do this, would obviously be to do this after a factory restore, and data wipe. But considering I am way past that point, I am trying to find another method.

I already backup all the applications I need, using Titanium Backup, so I don't want to backup my apps that will probably be different at the point of recovery, or will have certain apps I ditched before the point of restore, or have certain configurations I don't use/need/etc. I could go on and on. But the point Is I would just like to backup my stock rom, kernel, with my Super User privileges, without anything else. So I can basically use it as a factory reset, by just flashing my rom.

The main reason I ask this, is because I tend to get big into customization. Recently I used a font installer, form Rom Toolbox, and basically bricked my phone by getting caught in a boot loop. It would never pass to boot animation. So I had to use an old Odin Image with Clockwork Recovery. That was all I had. Luckily that fixed it, but I would like to make my own recovery images.

But, really the best thing I would just love, yet I am not sure whether it is possible, or as customizable, is it would be great if their was a way to just pick and choose what you want, or don't want to backup to a single image file.

Like an application that lets you choose certain things:

Now there wouldn't happen to be something like this for backups would there? Or is that just a dream of mine?

Even though right now, I would prefer to just backup only my system without everything else, like apps. Maybe one day in the future I may like to be able to backup other things as well. Which is why I ask. Might as well use a "one backup to rule them all" method if it exists. But if not that's fine, I could always just backup the system itself, and continue to use Titanium.

Now that, that is covered, what are all the different methods of backups? Odin. Nandroid. Anything else? What do they cover, and how customizable, etc.

Ive been looking into this for the past week, but I am having trouble finding something that is relevant to what I am looking for. And all the information regarding backups seems quite specific to certain devices, and custom roms. Which puts me kind of at a fallback, as I have a pretty uncommon device, with a pretty default rom.

I have a Samsung Conquer 4G (SPH-D600) With the FE16 firmware update, on a stock rom with root, with a slight mod of having ClockworkMod Recovery.

So when I press and hold the: "Volume Down, & Power button" it takes me to a "ClockworkMod based recovery mode" (according to what it says on the header on the screen.)

So that's what I am working with.

Any thoughts on this selective backup utilities I am thinking off? Any good resources I should look into on this topic? as well as any other information you may find relevant to this situation that you would care to share?

I would greatly appreciate any input on the subject, as android backups aren't a topic I know much of anything on, and cant really find any good resources on the subject myself. So any and all help is appreciated. Even just links are great. I enjoy reading for myself.

Odin is not a backup utility, its rather more of a means to flash boot/recovery and the rom itself. So that's one off the list. :)

Use CWM to backup the entire handset to SDCard - this includes, boot, recovery, system, userdata partitions. Easy and much quicker to restore from! The latest Titanium Backup can do a restore from a nandroid created by CWM. 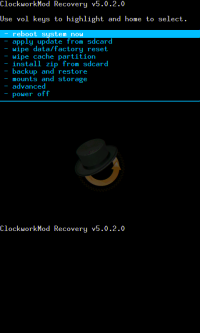 To perform the backup, use the Volume down key to scroll down until you reach 'backup and restore' as shown: 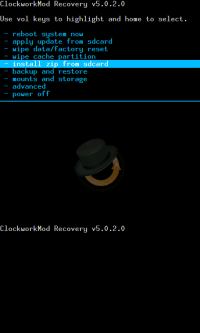 Hit the Home key, to bring you to this screen, the highlight bar is on '-Backup' for some obscure reason, the screenshot failed on this one so no screenshot, hit the home key again to start the backup process. 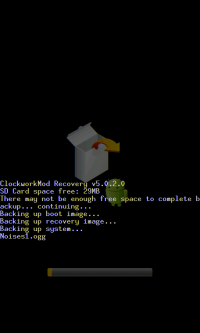 When you do a restore, it will erase boot/system and userdata, and does the job in dumping everything back in place. As if nothing has happened next time by rebooting within CWM. Consider this as a equivalent of a Windows System Restore Point, cannot go wrong there.

But ultimately, what you're asking for, Titanium Backup does it quite nicely. See the screenshot below, where there is a list of apps and can choose which to backup/restore. 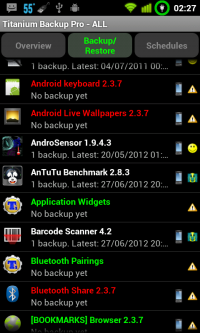 Here's a menu option to do the extraction from a CWM backup. 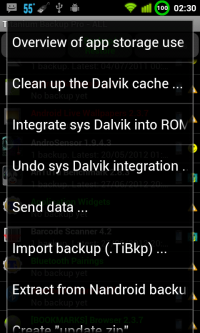 Ultimately, it is up to you how to do the backup, pretty much in the same way doing a backup on Windows, the strategy used will depend and vary, to each and to their own. Personally, as I experiment a lot with ROMs, I do a straight nandroid backup, then get down to flashing another ROM and if I don't like it, I can go back to CWM to do a restore.

As for Settings etc, I ignore them, as that can be a minefield which may cause a ROM's apps to force close so I disregard them and selectively choose which apps I wish to backup.

Using the two combined can be quite potent means of backing up.

Edit: This question - how you managed to take a sreenshot of CWM? If I'm not mistaken, it is run at the boot point making it act like a "BIOS" in terms of PCs. So how did you do it?

The recovery is identical to Android's ROM running from /system, it has its own kernel, near identical to the one used when booting into /system. The recovery has the init.rc script heavily modified to not to start up the Android's services that makes up the standard familiar environment. In fact, if you were to peek into the init.rc, it executes one program, called appropriately enough recovery which is what you're seeing here.

When the bootloader runs, its like this in English pseudo-code

So quite clearly, there is no difference behind the scenes, the kernel, shell scripts, etc.

As to how to obtain the screen-shots, that is a specialized script specifically for the Zte Blade and using the linux tools imagemagick command line utilities involving ffmpeg and mogrify, it is hardcoded to use the resolution of the screen for the Zte Blade, i.e. 800x480, and using adb to pull in the framebuffer, pass it into ffmpeg, and flip it over. IIRC, it does not work on any other resolution and depends on the kernel itself if it has framebuffers compiled in.

Not the answer you're looking for? Browse other questions tagged backup samsung-conquer or ask your own question.

2
ROM Toolbox claims backups are blocked; how can I work around this?
3
What folders should I backup to my computer
4
Recovery Mode: Backup options not showing
4
Backup ALL Android files to PC?
0
How to automatically backup everything to a safe location
0
Automatic nightly CWM nandroid backup?
0
How does Nokia automatic backup work on the new Android One devices?