I've been a happy owner of an Acer Iconia A500 for a bit over a year now but a couple of weeks ago it started to complain about its internal memory being full. I was a bit surprised as I keep movies, and such on the external SD card but I assumed is was some browser cache, Maps or so which had eaten up a fair chunk of the 32G memory it has internally.

However, that doesn't seem to be the case. I have cleared the data of almost every single App I have installed but still if I look at the Storage tab of the settings I see the following (a couple of hours ago): 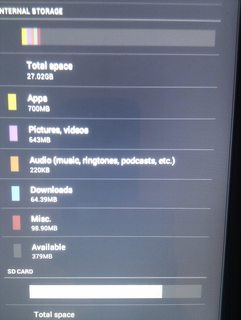 I get the feeling that the rightmost grey part of the bar should be a bit more than 379MB(the Available part)... (SD Card at the bottom of the picture is the external one, never mind that one).

I've tried almost every disk usage app available out there and they all show similar results, the following is DiskView (picture taken after I removed a few apps):

(in this picture "SD Card" is the internal one...)

One thing all the disk usage apps seems to have in common is that unless the device is rooted, they cannot see what is in some directories (like /data) which makes me think it is either Android itself (4.0.3 on this device) which has some kind of cache which is misbehaving or that some process is producing extreme amounts of logs somewhere.

Sorry for this long intro, but the basic question is: How do I proceed?

I guess one alternative is to find what is worth backing up and do a factory reset or something but I wold really like to find out what happened first.

Rooting it is an alternative which would probably help me find out more but I sort of like it as it is (except for this issue). If it is needed to resolve it I could of course do it but it feels like you shouldn't have to with an appliance like this.

Is there another way forward? I have this naive hope that there is a button somewhere I haven't seen that clears all logs or reduce the log level from debug to info.

Edit: One thing I've been considering but cannot investigate is if it could be cores. I've had a lot of crashes lately (presumably because it has been running low on disk).
In response to Izzy's comment below. Apps adds up to more or less exactly the 700MB listed as "Apps" (seems to be the total of data and the apps themselves).

This looks like the Acer GPS-log leak we had on an Acer Iconia A200:

The bottom line is that when the GPS is used, the GPS driver for ICS 4.0.3 on the Acer A-series tablets apparently writes numerous gl-YYYY-MM-DD-HHMMSS.txt files into the /data/gps directory. The files are apparently not automatically deleted, and so over time will consume most of the internal storage space.

Users can not delete these files without root access. However, there is a patch to clear the GPS log data (no root access needed, so no warranty voided).

There is a nice .pdf in the download, describing the above steps in detail with (screen)shots. (It also talks about an accompanying user_cleanGPSlog text file, but we didn't have it and did not seem to need it.)

Here are some key points to this problem. Though not all of them applied in this case, I will still include all of them -- as in another case they might prove helpful:

The following screenshot shows the output of df -h on a Motorola Droid 2. As you can see, there are 2 mount points on internal storage which could be candidates for "getting filled": /data (the most likely -- and got the hit in this case) plus /cache. The command was executed without root privileges: 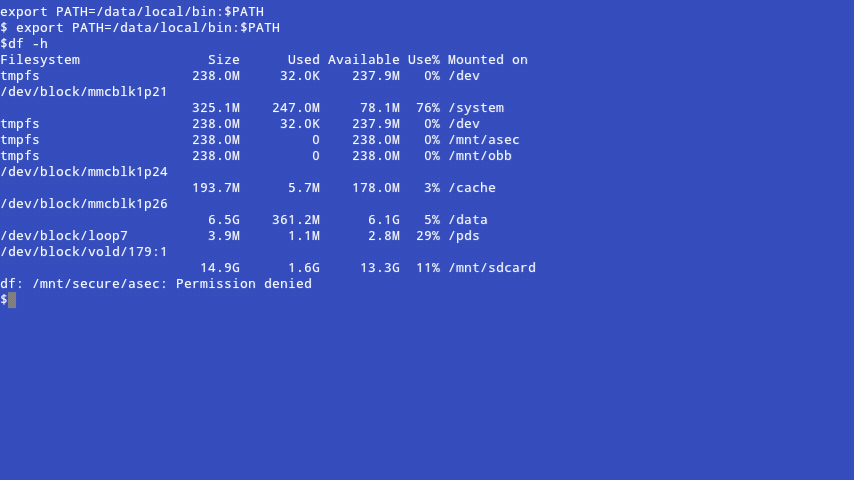 Tombstones: The folder's location is /data/tombstones. Permissions of the /data directory are drwxrwxr-x, the tombstones subdirectory has drwxr-xr-x -- so they are accessible also on non-rooted devices. Using a terminal emulator (see above), you can cd /data/tombstones and do a ls -l to see whether there are any tombstones, and what size they occupy. Unfortunately, all tombstones are owned by system, and permissions are set to rwx------ -- so if that's your troublemaker: you cannot remove them without root :( Have a good backup (huh? how, without root?), and probably a factory-reset will be your last resort...

I had this same problem with my Acer A100 tablet and found the source of the problem: there's a folder located in /data/gps that fills up with txt files. Mine was 4.3G. If your device is rooted, you can delete them from a terminal emulator or adb and reclaim your space:

First delete the .thumbnail folder within your DCIM directory, then switch of the device and turn back on. This solved the problem for me.

2
Motorola Triumph - how to decrease internal memory (clear log files)
1
What else is occupying my android phone's internal space
32
Why am I constantly running out of space on my Galaxy S2?
20
My internal storage capacity is running low, what can I do?
13
"Insufficient storage" when trying to install new app
15
“Insufficient storage available”. Ok, but where?
6
Where has all my storage space gone?
7
My space used and free space doesn't add up
6
Server Error! Play Store failing
3
How can I fix internal storage growing for no reason?
See more linked questions

0
Can the Netflix app be loaded on an Acer Iconia A500 without rooting?
2
Is there a solution for poor Acer Iconia A500 playback of MP4 video?
2
Acer Iconia Tab A500 - Rooting & Honeycomb 3.2
12
How can I get rid of the low disk space notification?
5
Memory settings menu inconsistently shows internal storage half-empty and completely full at the same time
0
Is there a way to connect Acer Iconia A500 tablet to windows PC via USB as a drive, not a device?
1
Transferring data from SD Card to Internal Memory and vice versa
0
Secondary memory storage of a mobile device