Why my phone battery has four terminal? what is the use of the fourth?

I have a LG Optimus One (P500). For sometime I am wondering why my phone's battery has four terminals. I am aware that two terminals are for the positive and negative points and the the third connects to the battery's internal thermistor to monitor its temperature. Still that leaves me puzzled with what the fourth terminal could be for?

Interestingly my phone has only three terminal where as the battery has four. I have searched for answers in Google but no useful results other than description about temperature monitoring comes up.

Also since another doubt also lies in the same image, what is the port that is marked as "A" in the following image? It appears to me as some sort connector and my guess is that it is a connector to a cable with which manufacturers can access something deep in hardware. The Nokia phones which I had also had this feature and I guess this should be common for all phone then. 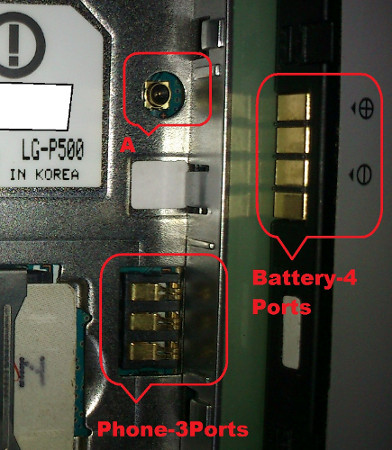 Update: I am more keen on knowing what the fourth terminal on the battery does rather than why there are three in phone and four in battery. As @Axeman said, this battery could be used in other phones (of LG) as well.

Connector A seems a U.FL-R-SMT-10 and probably is for an external/additional antenna.

U.FL, is a miniature coaxial RF connector for high-frequency signals up to 6 GHz manufactured by Hirose Electric Group in Japan.1 U.FL connectors are commonly used inside laptops and embedded systems to connect the Wi-Fi antenna to a Mini PCI card. Female U.FL connectors are not designed with reconnection in mind, and they are only rated for a few reconnects before replacement is needed. The female U.FL connectors are generally not sold separately, but rather as part of a pigtail with a high-quality 1.32 mm doubly shielded cable, which allows for a low-loss connection.

As @Axeman said, the connector is an Ultra Small Surface Mount Coaxial connector (quite a mouthful and still could not get how it was abbreviated as U.FL) which is a kind of expansion port which could be used for any radio communication, including GSM, WiFi, GPS.

And as @Lie Ryan said, the fourth terminal in the battery is for connecting the antennae in the battery to NFC circuitry on the motherboard. Few searches in Google confirmed this and gives raise to following information:

Those who have NFC in their phones, may lose the NFC capabilities if they try to replace with cheap and duplicate batteries which may not have the NFC antennae as said here.

I am summing up all the points to make this question as answered. I was unable to accept @Axeman's answer as complete as it did not answer the NFC part and @Lie Ryan had added as a comment only.

Kudos for them both!

Update: I happen to get hold of LG P500's service manual which confirms the RF connector with the following image tagged as SW1001. 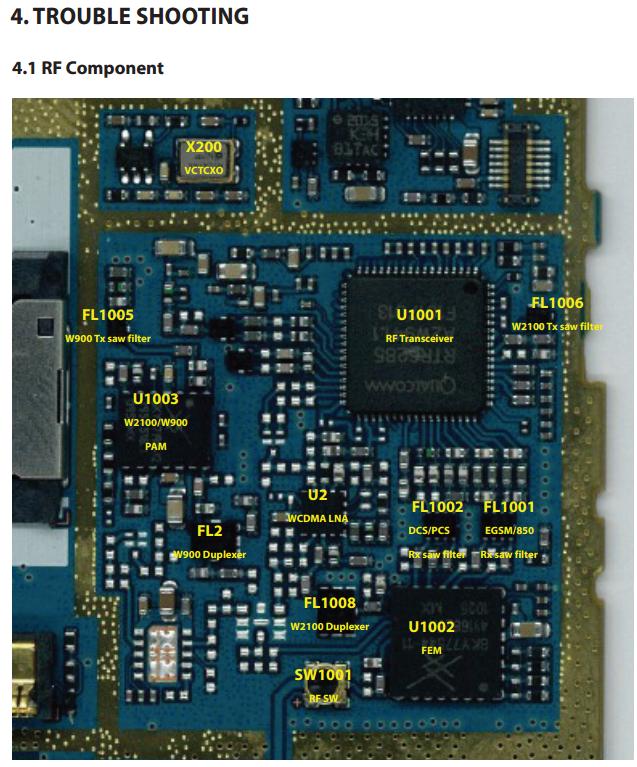 Talking about LG, it's likely this is not any kind of NFC. I have an LG phone with 4-pin port on the phone and 4-pin battery. When I cover the 4th pin with some masking tape, the phone complains the battery is not genuine and refuses to boot picture.

A quick poke with a logic analyzer has shown me that there's a communication between phone and battery of some kind. Conclusion - it's "battery DRM", used at least on some LG phones (mine is LG Tribute). If your LG phone has 4 pin battery port, it's got this "DRM". If not, it simply doesn't care.

Not the answer you're looking for? Browse other questions tagged battery lg-optimus-one or ask your own question.

16
Why is the NFC in the Galaxy Nexus battery?
20
How does Android obtain battery temperature?
1
Powering Samsung Galaxy J7 using an external DC power supply

6
Is there anything that can show exactly what has awaken my phone?
4
Can you actually determine the mAh of a battery?
1
How can I enable/add USB OTG support to my rooted stock LG P500?
1
Should I accept 2,5 year old Samsung Galaxy replacement battery?
2
How to troubleshoot overheating and high battery drain in an Android Device?
0
How do I determine exactly which process is draining my battery?
3
What resets the battery stats
1
What is the approximate battery discharge rate of Google Pixel 3XL phones when turned off?