My skullcandy earbuds with built-in mic only partially work with my Maxx. The earbuds do their part broadcasting sound, but I have to talk directly into the phone's mic to be heard. The earbud's mic, which I assume is opposite its volume control, does/perceives nothing. Any clues?

You might need an adapter. I know that when I bought a couple of ear plugs with a mic once, I got an adapter with them that stated the adapter was for Samsung, among other brands. On the surface it looked like a "3,5 mm > 3,5 mm" adapter so I wasn't sure what the difference was, but upon inspecting it I noticed the plug had three "lines" where it usually only has two (I think). Don't quote me on this, but it obviously had a point since they included it.

So in short, it might be that your Skullcandy earbuds are made to work with iPhones for example, but the designers did not consider how the plugs are made for Samsung or other Android devices. If you have a working pair, try comparing the plugs.

To fix it, I guess you would need an adapter. In the future this could be good to know as well, so you can adapt your purchase after what product supports your phone.

You will need an male to female adapter that switches the ground and mic connectors. See the image below: 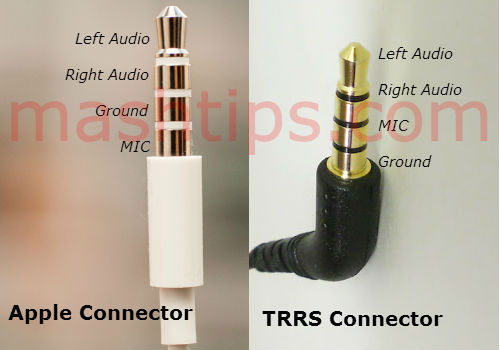 Not the answer you're looking for? Browse other questions tagged headphones microphone or ask your own question.