What happened to my detailed battery stats on my Asus Transformer Pad?

I have an Asus Transformer Pad tablet (TF300T). As with any other Android device I've owned, when I go to the settings menu and tap "battery", it gives me a detailed break down of which apps and processes are eating my battery power. Well, at least it used to do that.

Nowadays, when I visit the battery settings, only 3 power consumers are listed: 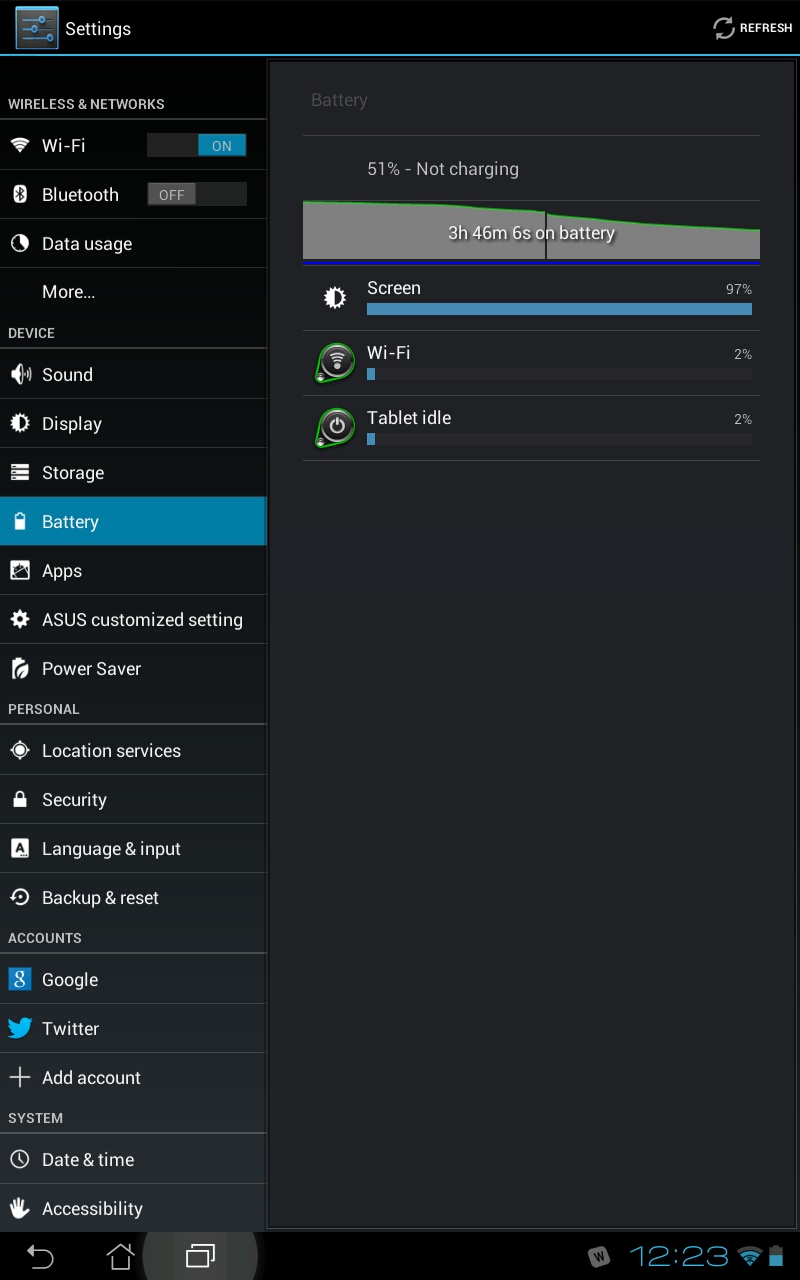 Why aren't any of the apps I've been using listed? And what about system processes?

One possibility that occurred to me is that nothing that is using less than 1-2% of the power is being listed, and all my apps are below the threshold. However, that seems unlikely to me as I've played dynamic 3D games and used other CPU-intensive apps at times, and after doing so I've checked the battery activity and they still don't show up.

Before taking this screenshot I was using Pocket, Feedly, Mantano Reader Premium, Chrome, and Words with Friends for hours, alternating between them. Surely some of that should be shown here, right?

When I check the battery activity on my cell phone (A Galaxy Nexus), I see Pocket has used 6% of my battery, and maps has used 3%. And I don't even use those apps on my cell phone nearly as much as I do on my tablet. Yet my tablet is completely silent about them.

It also occurred to me that this problem may have started when I upgraded my tablet to Android 4.1 Jelly Bean about 3 weeks ago. But I can't be sure, and I don't know what to do about it if that turns out to be true.

Can anyone tell me what happened to my battery usage data, and if there's any way to fix this going forward?

From what I recall, that report doesn't show anything that has used less than 1%. Considering how much of it is screen usage, I'll bet that that's the issue.

Not the answer you're looking for? Browse other questions tagged asus-eee-pad-transformer battery-life .

2
How to root my ASUS Eee Pad Transformer?
4
Battery level on Asus eee pad Transformer with dock
3
Changing language from hardware keyboard in ASUS Eee Pad Transformer TF300T
0
Disabling SwiftKey autocompletion on Asus Transformer Pad
4
"Phone" item using 10-15% of Battery Life
4
I have something called mdnsd draining my battery, but I don't have firefox, I just use the basic browser what other apps cause this issue?
0
What do the app "usage" times in battery settings represent, exactly?
3
What resets the battery stats