How can I see what IP address my android phone has?

I would like to know what IP-address my Android phone has. E.g. if I use my phone over WiFi, how can I get the local IP-address that is assigned to my phone?

The easy way is to go to your WiFi Settings, and hit Menu > Advanced. It'll show up there, or you can set it to a static IP if you want.

ifconfig was an annoying implementation that did not show all versions by default on earlier versions as explained below, but now it works fine.

This tool was removed in later Android, and ifconfig was made more decent and shows all interfaces by default, thus rendering this method useless on newer versions.

from your desktop is the best option if you're already developing for Android and have adb and an USB connection setup.

ifconfig on Android (home-brewed?) is different from the one on desktops (net-tools package on Ubuntu 15.10) as it requires the interface to be given.

This is also mentioned at: Is there a command or application similar to ipconfig?

You could also install a terminal emulator like Teriminal Emulator from Jack Palevich, open it and type: netcfg. But in that case you'd be better off with some app that shows the IPs, since typing on devices is a pain (unless you've got an external keyboard...).

If you are at home, you can:

The easiest way is using a tool like e.g. OS Monitor, which shows you (amongst others) also a lot of network details: 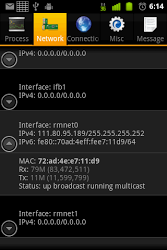 As the screenshot shows, this app reveals for each network interface:

¹ interface names might be handled differently on different devices. But in most cases you can tell from the IP where it belongs to. Furthermore, rmnet is mostly used for GPRS (mobile data), while WiFi uses names like tiwlan or eth.

In any terminal emulator app:

Applicable both to WiFi and Mobile Data. Doesn't require root.

Not the answer you're looking for? Browse other questions tagged networking internet or ask your own question.

25
Is there a command or application similar to ipconfig?
13
Can I use ADB without connecting over USB?
0
Monitor Outbound Connections

25
Is there a command or application similar to ipconfig?
7
Change MAC address Android using ip link?
0
Send SMS to Email address using Android without Internet
1
Find Proxy IP address used by Android app
7
How does Android determine if it has an Internet connection?
0
Error trying to access my tablet from my PC
1
Android phone fails to communicate using IPv6