What is system partition? How its size is fixed? Can it be resized?

I observed that Google's My Location service was not working. Many apps like My tracks, Endomondo etc which were compatible with other phones with 4.1 were said incompatible. All microphone related apps were not working.

After several hours of breaking my head, I understood that my /system partition was absolutely full. It had only 4kb of free space out of 190MB total capacity. With my investigation I found that few files were not copied to the /system partition during the ROM installation and Gapps installation. Many troubles are the result of such missing files.

After all these issues, I switched back to my stock 2.3.3 and I still see my /system partition as 190MB but with lot of free space. Does this mean that 190MB is sort of hardware size/limitation?

If it is so, then this would be one of the serious factors that are to be considered while buying the phone as the hardware in other means can accommodate the needs of JB except the /system partition size, which is a real shame. 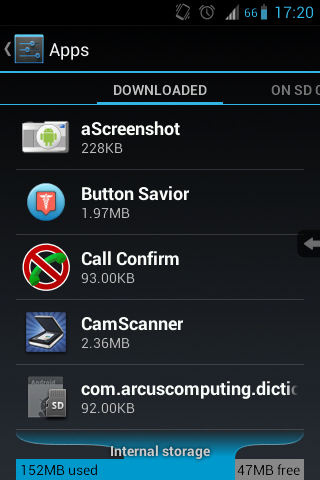 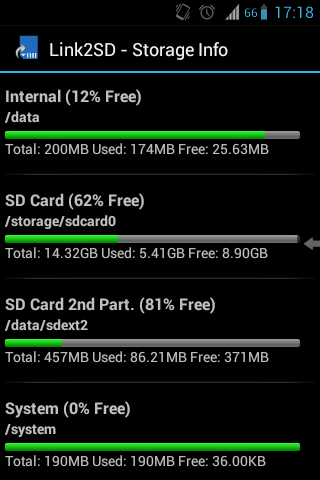 This will not change the partition size of /system, but uses another approach: Limit the data placed on that partition. So here's what I did before flashing CM7.2 on my Milestone²:

As you removed a lot/couple of apps from /system, flashing will require less space there, and no essential parts should be missing any longer. Now if you still want to use e.g. GooglePlus, you can install it via the Playstore (which should place it below /data, so no prob) or, if not found there, use the copy created in step 3 to install it manually (for this, make sure install from other sources is enabled in your settings).

If in doubt whether a file is really needed by the system itself, better leave it (or at least ask first). But I'm pretty sure you will find enough "easy removables", so you won't need to touch those. Before flashing, you could unpack the .zip to an empty folder and check the size of /system (best: make a "before" and an "after" check). It should occupy less than 190MB (better give it some additional safety margin, say "less than 180MB") for your action to complete successfully.

The manufacturers decided that. They probably expected that that size would be sufficient during the expected time they will continue official support for the phone.

If you're rooted and installed custom boot loader, yes partitions can be resized, although not in a way that will satisfy everyone since it takes space away from internal memory and many people also have exhausted their internal space; it involves a lot of work to test and debug and since P500 has very little internal memory as well, at some point developers had to decide that it's just not worth the effort.

I tried a tool but did not help. After all the process completed without any errors, I still see no change in the size. Are there any other ways to do it?

What did you try?

Pretty much. All newer phones comes with much larger internal memory, you should consider an upgrade if you really wanted JB.

Here is a program that will supposedly do it. http://androidforums.com/optimus-gt540-all-things-root/436600-easily-resize-system-data-partitions.html

I don't know about system partitions on Android phones but normally partitions can be resized but it means that you lose everything that partition contains. If the partition contains the OS it would mean that after resizing the partition your phone wouldn't turn on. If you're not willing to take the risk I suggest finding a source that says that won't happen. Else I suggest looking at the ROM apps in the Play Store (there are many good ones and they can probably do what you want). Also how much internal space you have on your phone? Is the system partition the only internal partition?

You can also partition your SD card which makes it work more efficiently. So your phone works faster but you have to do it with a new SD card because you lose everything when you partition it if there is not enough internal storage on your phone that possibly might be something to look into as a solution but I don't think placing a whole OS on SD is possible because it would be just too slow, so unless the OS has some files it can read from the SD card and you can place them there manually specifying the path, you are out of luck. That's why I ask how much internal space your device has.

Not the answer you're looking for? Browse other questions tagged 4.1-jelly-bean rom-flashing partitions lg-optimus-one or ask your own question.

1
ROMManager does not backup my sd-ext
1
Removing files from & repackaging CyanogenMod ROM zip files
6
What's the difference between flashing Gapps on system partition vs installing from play store?
1
Broken SONY SD Card, formatting, “shredding”, adding/deleting files to no avail
4
How to resize the /data F2FS partition
1
How to properly increase system partition on Moto G xt1033?
15
Why is there no option to choose size in TWRP's resize partition feature?