Does Bluetooth tethering not work, or am I doing it wrong?

I carry two Android devices: my Nexus S phone, and a Nexus 7 tablet (both running Android 4.1 "Jellybean"). The tablet has Wi-Fi, but no cellular radio; so in order to use the Internet with it when there's no Wi-Fi hotspot nearby, I have the phone set up for Wi-Fi tethering: it effectively becomes a Wi-Fi hotspot, and the tablet uses that for Internet access. This works perfectly.

However, I recently discovered what appears to be an alternate method of tethering: Bluetooth. Both devices have menu options that seem to allow it; here's screenshots of how I configured both devices: 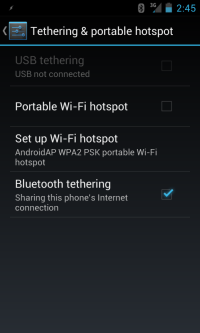 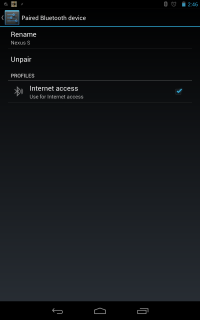 Options on Phone and Tablet (click images for larger variants)

I tested this by turning Wi-Fi off on both devices, then opening the browser on the tablet and refreshing the page that happened to be loaded. I saw a message that said

I was, of course, hoping to see the page reload.

It's a shame that I cannot get this to work, because it promises one advantage over Wi-Fi tethering: easier security. I want to prevent other people from stealing my bandwidth; with Wi-Fi, this requires that I set up a WPA password, and then get that password onto the tablet somehow (which is quite tedious). But with Bluetooth, all that's required is that I "pair" the devices, which I've already done.

So I am wondering if I'm doing something wrong, or if this feature simply doesn't work.

Maybe this is too late for some of you but this is a solution for Android 4.2:

Basically you need TUN module since the standard configuration does not include it: Google Play - TUN.ko installer

There are two distinct modes for WiFi.

(1.) Using WiFi between one or more devices and an Access Point (AP). This includes what happens when setup a device as a WiFi hot-spot for other devices.

(2.) Using WiFi as an ad-hoc network, between two devices.

By default, Bluetooth operates like (.2), and allows for sub-devices (keyboard, speakers, microphone, etc.) to be attached or 'paired' to a different device.

You need to identify whether you can have your non-cellular capable device pair with the cellular-radio service of the other device. This would first require that device to 'publish' this as a Bluetooth sub-device (or 'service'), and then for the other device to be able to 'discover' it.

None of this is impossible, but some of the pieces may require extra drives or settings not currently available (or configured). Good Luck.

On my stock Transformer tablet (running ICS 4.0.3) and my Galaxy Nexus phone (running JB 4.1.2), I first had to pair the two devices, then enable internet sharing on the phone, then in the Bluetooth settings of the tablet touch the phone's item in the paired devices list. This activates the internet connection sharing. It seems that the sharing doesn't happen automatically; that is, the tablet doesn't automatically fall back to the bluetooth device even if there is no wifi available.

I wonder whether you're confused - as I was - with the presence of the tick and the wording 'Use for internet access' on the profile page?

Once the devices are paired - when it asks you to confirm they're both showing the same numeric code - you have to set one phone to offer a bluetooth tether, and then on the other press the 'Use for internet access' line - with the tick that looks like it means it's already working. It'll show 'Connected to device for internet access' and the tick will stay on. The tether-offering phone will say 'sharing this phone's internet connection' on the tether and hotspot screen.

Sometimes I find the connection refuses to stay connected for more than a second or so. I have no idea which phone isn't cooperating, but when they're in that mood it generally means I have to disable both bluetooth interfaces and start the tether one again, first.

Figured I'd check in again :) My phone and tablet are both running 4.2.2; bluetooth tethering has been working perfectly for months. There must have been a bug in 4.1 that got fixed in 4.2.

I had the same problem . Finally, I figured it out. It's a bug. The JB device fails to register the connection parameters (DNS) for Bluethooth network after connecting to tethered device and uses DNS of default wifi connection to connect, so the request fails with a timeout.

Rooted users can fix the issue using a set of commands in terminal, either using ADB or Terminal emulator.

Not the answer you're looking for? Browse other questions tagged bluetooth tethering wifi-tethering bluetooth-tethering .

4
How to make Bluetooth tethering work?