How to import GPS coordinates track for using offline

I have a map (GPS coordinates) of a route. The coordinates are in TRK,GPX,KMZ,PLT formats.

During my trip I will not have internet connection, so I can't upload the map too GoogleMaps and use it.

Is there an application that will allow me to use the map offline?

The solution I use is TrekBuddy. I have been using this app for the past 5 years in various platforms from Java to Symbian to Android.

This app can load offline map and show your (GPs) position on it. It can show and record your trail (as GPX) and you can show predefined way points on the map (using GPX again). Being a free project from beginning, it does not have a great documentation and support.

In spite of all these downsides, I can still vouch it as one of the most useful and most powerful GPS-Navigation-Tracking app. It requires a bit of learning curve and some serious homework, but that comes at the benefit of using the navigation with out Internet connection.

There are quite a lot of documentation, tools and How-Tos in wiki style in their home page.

I have been using this app for my trekking, city navigation and touring. Few capabilities of this app are:

PS: I am in no way associated with TrekBuddy other than I am using it and amazed by its usefulness, which you would have probably guessed by now ;-)

Official Google maps now allows pre-downloading map tiles. With this you can select an area which you would be visiting and download them when you are with WiFi connection. However there are no way you can record the route. For that you may have to use MyTracks app from Google.

You can choose one specific route and save it to use later:

You can take a look at Locus Maps, which allows for importing many different formats, including GPX, KML and KMZ. If the latter are nicely organized, a KMZ can even include images for POIs etc. to be used offline (how to do this, is described step-by-step in this tutorial on the Locus forum), see the screenshot below2 for an example of detail display, showing an older version of the app. The app even allows for navigation (network only needed at the start, for route calculation), offline maps (downloadable right from within the app1), and much more: 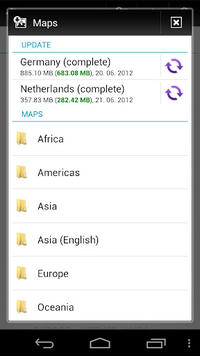 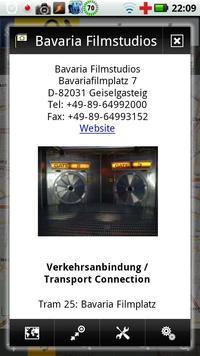 Not the answer you're looking for? Browse other questions tagged gps gps-tracking offline-map or ask your own question.

15
How to get maps for off-line usage?
7
How to have my phone guide me through a specific route
3
Download Region or State for offline Map
2
Are there maps that I can download to a PC and later transfer to the android phone?

7
Why does it take so long for a program like Mapdroid to use the GPS to track you on a map
8
GPS app to follow a prepared itinerary
0
Offline map app capable of using Garmin Custom Maps / KMZ?
2
Are there maps that I can download to a PC and later transfer to the android phone?
3
Easily record GPS coordinates in OpenStreetMap
3
Display GPX in Google Maps or other simple application?
1
How do I track a GPS device that has no connectivity with an internet or cellular network?
1
Are GPS coordinates more accurate if they are fetched at a small interval