Why does the CM7 Radio FM app require bluetooth to run?

The FM Radio app on my stock ROM(s) (Samsung 2.2 and 2.3) only required to plug in earphones. And that was the case with any phone radio app on any cell phone.

But why does the app which comes with CM7 require both bluetooth turned on and earphones plugged in?

(Apparently, from the "about" page in the settings, it is developed by MIUI) 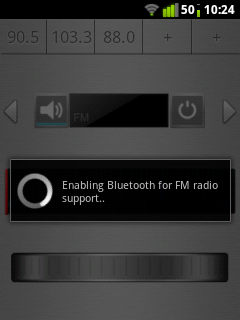 The radio chip-set is more than likely, shared with Bluetooth and thus issues the commands specific to bluetooth to be able to switch on the FM receiver. This will depend on the handset in question.

You do need the headset to be plugged in as that acts as a FM Antenna.

The FM radio framework was an add-on to the CM source at the time of GB 2.3.7; the headset acting as antenna is indeed the mechanism (don't ask me how/why, but its common among certain chip-sets that requires it).

The actual FM Radio app was developed by Andorko, he used to hang out on the Zte Blade Community, developed the radio and one of the CM devs on that same community, integrated the Radio framework into CM, (Which was non-standard). As due to the popularity of the FMRadio application, it was tweaked and adapted for other chip-sets in question based on handset.

Depending on handset, Silicon Industries is one, si470x (x being 8 or 9) is common (used on Galaxy 5, Zte Blade), there's Texas Instruments (TI) which shares the bluetooth functionality within the TI chip-set - we're talking SoC (System on Chip), by sending a series of bluetooth HCI commands, the FM radio receiver starts up.

By your comment below 'why did it work before?' that is assuming it was a stock ROM that came with Galaxy Fit handset, then in that case, the FM radio support was based on some proprietary software within the stock FM application itself.

CM 7.2 handled it differently using a non-standard framework for communicating with the FM radio, in which the above radio application that comes with CM, was adapted for that very reason.

Not the answer you're looking for? Browse other questions tagged bluetooth fm-radio or ask your own question.