Beside shut down the phone, are there ways to prevent battery usage for Call Standby?

Beside shutting down the phone so that the battery will not be used for Call Standby or/and Phone Idle, are there other ways that can prevent the battery from being wasted? (Would the use of Airplane-Mode help.)

Please note that the phone is not rooted and reception was not poor.

Yes, using Airplane Mode will reduce power drain, as the commentors have already answered. But this approach can't be considered Call Standby, because you will not receive calls. From the point of view of cellular operator, your phone behaves exactly as if shut down.

Switching to Airplane mode shuts down the cellular connection, including voice and data, but it also turns off Wi-Fi and Bluetooth. Note that you can turn any of them ON in Airplane mode, but this will put extra load on the battery.

Except from radio, the major power consumer is the screen. Actually, typically it uses much more power than all the radios together. If you want to keep running longer, set brightness to minimum, set "screen off" timeout to minimum, and avoid turning the screen too often. If you have an AMOLED device, e.g. Galaxy Nexus, the display power request depends on the actual brightness of the screen. If you choose a darker theme, or switch your book reader to "night mode", you can reduce the battery drain.

Of all colors except black, red uses the least power. See description of a special app that boasts battery life improvement by applying color filter and adjusting the brightness: http://www.azzamtranslator.com/lux-auto-brightness-manual-or-auto-screen-brightness-adjustments-according-to-time-or-environment/.

Note that Airplane Mode does not disable GPS. GPS is not running on its own, so disabling it in location settings will not effect the battery life, but if some app, like Maps or Camera decides to check your location too often, this may become very significant. Without cellular or Wi-Fi, GPS can actually need even more power, because it will not have the crude location estimate to begin from.

Other than that, any app that runs in background can wake the CPU up and consume more power. Use a task manager to shut down applications that you don't need in your "standby" mode. This is especially important if you decide not to switch to Airplane Mode, because the apps in background can not usually do much if they don't have access to Internet.

If you choose not to switch to Airplane Mode, there are other things you should be aware of. Turn off system synch and turn off cellular data. Set "2G only" if this is available on your phone and on your network. Shut down any unused background apps. Don't wake the screen up too often.

Finally, Android includes a nice utility (in Settings/Battery) that displays power consumption by different components of the system, in percent: 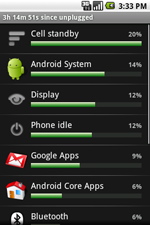 Many system tools available on the Play Store feature similar or improved versions of this monitor.

Not the answer you're looking for? Browse other questions tagged battery-life standby or ask your own question.

72
What is *Cell standby* and how can I keep it from eating my battery?