I own a sony xperia tipo that has around 2 gigabytes of internal storage.

Today, I got a warning that my phone's internal storage is full, while using google currents, so I went to the storage menu in the settings, to take a look, and I saw that the calculated amount of used memory in the internal storage section was a tiny bit over 1gb. This didn't sit well with the fact that the reported free space was only 2mb instead of one giga and a half, as I thought it ought to be.

Trying to update apps that reside in the internal storage fails with an "insufficient memory" error.

I have no idea about what the problem might be and how to solve it, but I would like to try and avoid a factory reset, if that is possible.

Any help is greatly appreciated and thank you in advance for it.

EDIT: Here are two screenshots where you can clearly see that the total used space and available space do not add up to 2.15GB as they should but are only around 1gigabyte.

I have no idea what could be responsible for this phantom gigabyte, but one would think that the amount of memory the OS uses would have been subtracted from the "total space" and from the "phone memory" entry (not shown here) instead of the internal storage. 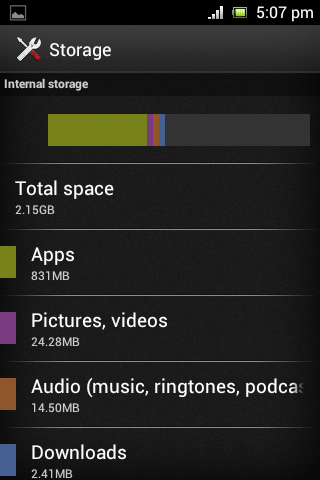 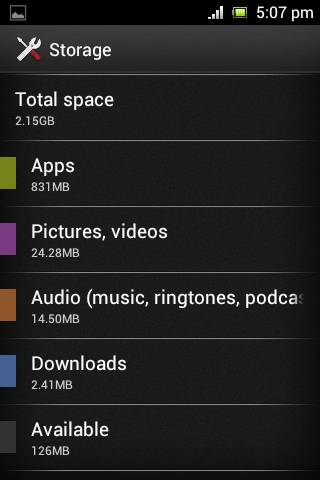 Your phone keeps the thumbnails of all the photos that go through your phone. Connect it to your computer and delete all the contents of the folder called ".thumbnail" in the internal storage. You should find that folder inside the DCIM folder.

Devices with internal SD cards / memory (for instance, my Galaxy S3 has 16GB), are split into many partitions.

12GB is partitioned into /dev/mmcblk0p15 and mounted on /data

/sdcard (aka your user-available storage) is not a real partition, its actually a 'symlink' of sorts to /data/media

So the settings->storage (and a lot of apps, eg; ES File Manager), will report 12GB as your "total" partition size for /sdcard, even though your "sdcard" actually has 12GB - app - data - cache = 10.5GB (in my case) space available to it.

You need to be rooted, and use an app called "DiskUsage" from google play.. It will show you where your used space is going. Hope that helps!

Beside the color of both phones is different there is no difference in sw versions. The only difference in usage I can imagine is that she is rebooting her phone quite often (daily) and I am only chaging phone volume in the night.

Maybe there is a problem with bad memory blocks on the sdcard, although I do not want to root her phone and don't know whether it is possible to see it another way.

The internal storage is also used to store system apps, and the data from system apps.

It is possible that most of the space is going to system apps, and Sony is quite bad for including loads of bloatware.

Try this... hook your android device on any pc... plug it in and turn on USB STORAGE... and then right click on the device and then choose properties and then choose tools tab... run error checking and then let check both automatically fix system errors and scan and attempt to recover bad sectors... after this go to the root of your memory there would be a hidden folder named FOUND.000... delete that and youll be problem free...

Not a solution, but look at the difference between an apps memory usage when its on the internal memory, then on the phone memory. I have an app taking up 1.39 mb on the internal, move it to phone and suddenly it's 33 mb. Why it hides all this memory I don't know.