Android device can support SD Card of up to 32 GB, so FAT32 is more suitable?

May I assume that there is no point to format your SD Card (assume you have the 32 GB size) to NTFS if the device can support SD Card of up to 32 GB and FAT32 maximum limit is also exactly 32 GB?

The reason for asking such question is that since the device can only support 32 GB, so I can assume that NTFS will likely not be supported by the device, or I cannot assume in this way? And this FAT32 will be more suitable and likely to be accepted by major android devices?

32GB is the limit imposed by the Secure Digital High Capacity (SDHC) specification, not FAT32.

FAT32 supports 2TB drives, with a standard 512 byte sector (or 16TB with 4.096 byte sectors) which is (coincidentally?) the same as the latest Secure Digital eXtended Capacity (SDXC) specification, so FAT32 should be viable for some time to come.

The biggest restriction with a FAT32 formatted drive is the per file size restriction. Since FAT32 uses 32bit file pointers, which means that no single file can be larger than 4GB (actually 232-1). Most of the time this isn't a problem, but if you want to transport movies or virtual machines which aren't split into multiple smaller files, then this might cause you problems.

As an aside, in an answer like this, I can't help but illustrate it with a favorite picture of mine which compares 8 bytes of magnetic core memory from 1953 with 8GB (8 thousand million bytes) of flash from 2008: 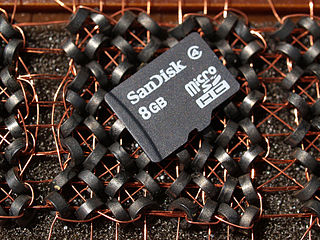 In the same space as those 8 bytes from 1953 you could now fit 8x or 12x 32GB uSD cards (when you take into account thickness too) so who knows where we will be in another 55 years? Probably wondering how we got by with only a couple of terabytes in our phone. *8')

The above answers are correct but I am as of yet not allowed to post comments it seems. Still, I thought it worth pointing out that devices where the manufacturer claimed maximum is 32 GB have in the past often supported 64GB or higher cards as well as long as the user reformatted the cards as FAT32 (or another supported filesystem I imagine). The SDXC standard mandates that the cards are sold formatted as exFAT but the standard also includes backward compatibility with SDHC devices, albeit at slightly lower speeds.

So you can't copy a huge 4GB (or more) single file to a FAT32-formatted sd card.

AFAIK, android OS does support NTFS and you may want to use it, as it has many benefits over old FAT32.

Not the answer you're looking for? Browse other questions tagged external-sd or ask your own question.

3
Is the external storage size limit hardware or software?