Turn notifications on and off based on time periods

There are several automation apps in the playstore which deal with this kind of subject. Some of them are simply time-based (which would match your question), such as e.g. Timeriffic1 -- others additionally can react on other conditions like location, calendar and more (e.g. MyProfiles2). The top end of flexibility can be reached with Tasker -- there's almost nothing this app couldn't do. It needs some time to get used to, and costs some money, but for sure it's worth it. 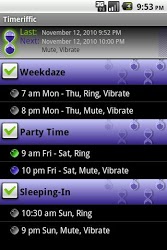 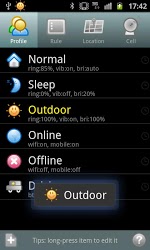 There are a lot of more apps like the mentioned ones, so just take them as examples for further "investigation" in the playstore. There also is a German listing on AndroidPIT (Automatisierung -- Profile-Switcher & Co -- Google Translate Version) to give you a faster start looking for alternatives.

"Do not disturb" mode should be present in stock and skinned Android versions. It can be accessed through the Settings. You can set which apps can send what notifications at what time.

The main benefit is no third-party app needs to be installed.

On my Samsung Galaxy S4 has a blocking mode that you can only receive calls or notification of calls in between certain times...unless you put people on a contact allowed list...not sure how this will work with texts.

Not the answer you're looking for? Browse other questions tagged settings notifications automation or ask your own question.

14
Can I silence only certain notifications during the night?
2
How can I run a sequence of applications or actions on certain triggers on Android?