I've heard from various sources that Android does have SIP support built in starting around version 2.3 Gingerbread, but I yet to see a single phone actually having it in its setup menus.

Just returned from a B&M store having played with a few recent phones from HTC and Samsung (all of them ICS, earlier I've checked a few Android 2.* phones) - and NONE displayed any traces of SIP support whatsoever.

I understand that carrier bundled phones may have SIP disabled on purpose, but why disable SIP in the unbundled phones retailing for $400-600?

Is there out there some sort of an official list of Android phone models having SIP support available off the shelf?

SIP comes directly with the Android system, as you said, starting with Gingerbread. You find it in the system settings: Call Settings, at the very end: Internet Call Settings: 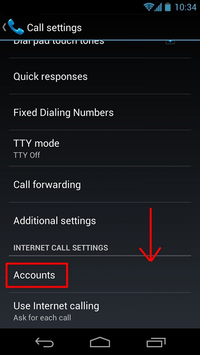 For more details, you can also check with the page Android SIP Client Configuration and Review, which explains you all the details.

As it comes with the Android System itself, all devices with Gingerbread or higher should have it.

I have an HTC One, and even though I cannot deduce why, my settings menu did not display options for SIP setup until AFTER I unlocked the bootloader. I will clarify that ALL I did was unlock the bootloader, I did NOT flash a new ROM. Again, this makes absolutely no sense, but it worked for me.

I have had Google Galaxy Nexus HSPA+ for a while, and it does have Internet Calling, which is one of the reasons why I was interested in the phone in the first place.

Long story short, it's the most horrible SIP client I've ever seen, with the most inflexible settings, doesn't actually work properly, and has all sorts of quality issues that do not manifest when using a third-party client instead. (To give you an actual example of what I'm talking about, I've somehow had this very strange multi-dozen-second delays in voice, which I have no explanation for, other than a terribly broken buffering logic, as SIP calls go through UDP, which would never do retransmission, hence no clue why someone thought that multi-dozen-second buffering was ever a good idea.)

If you cannot find the native Internet Calling in your phone, you aren't missing much. (I've long as disabled the said native client, and have been using a third-party client instead.)

Not the answer you're looking for? Browse other questions tagged 4.0-ice-cream-sandwich 2.3-gingerbread voip sip or ask your own question.

0
How to make incoming SIP calls work on Android 4.x?
0
Where did the SIP settings go to on my LG Optimus 4X?

10
What codecs does the 2.3-Gingerbread Internet calling (SIP) use?
8
Shortcut to enable / disable VoIP/SIP on Gingerbread?
1
Using an Android phone like a SIP ATA
2
Native SIP client in Samsung Galaxy S2 Android version 4.1.2
1
Change native Android SIP dialing settings
1
Can I route a call via SIP based on a phone number using native SIP android?