I am using a cloud service (Dropbox) when I am using internet for file transfer. But how can I transfer files between my PC and my Android device without going via the Internet? and of course without using data cable.

There are multiple solutions available:

If you connect your device to your PC via an USB cable, it shares (parts of) its storage to the PC. With versions prior to Android 4.x your device usually identifies as USB storage (like any external disk/USB-stick attached), never Android versions might use MTP instead, which might require special drivers on your PC to be used.

Once connected, you can transfer files easily between PC and Android device.

If your device features a slot for sd cards, you could simply remove the sd card from your device (remember to unmount it first via the device's setup menu), put it into a card reader, and attach it to the PC. It should then pop-up on your PC as "USB storage" as described above.

There are a bunch of wireless solutions available -- and this is not the place to list them all. Principially, you can install any FTP/Web server, and configure it to offer the directories you wish to access.

As this might be too complicated for many users, there are quite easy solutions. The probably most well-known is AirDroid, which offers a nice interface to manage almost your entire device from your PC: 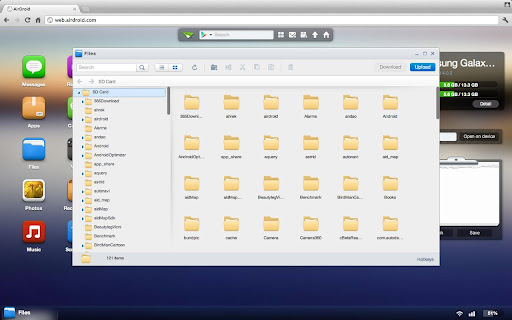 As the example screenshot shows, a file browser is included -- and permits you to upload and download files to/from your device.

A second example for an easy-to-use app would be WiFi File Transfer, which -- as the name suggests -- is specialized to transfer files via WiFi: 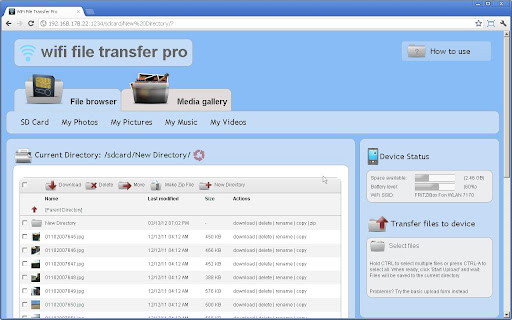 There are many more possibilities, just check the playstore. A good starting point are the playstore pages of the mentioned two examples, then lookup related apps.

There are many more wireless solutions available. As Logos mentioned it in his comment, I will add some examples here for completeness:

You can use apps like Samba Filesharing to turn your Android device into a Samba server. In short, Samba (or SMB, or CIFS) is the protocol used by Windows shares. Linux also understands this protocol. Using Samba, one thus can access the Android device's file system (without root, this will be restricted to the internal/external sd card) like any Samba-/Windows share.

Several apps like e.g. DavDrive can share the Android device's storage via the WebDAV protocol. This works via HTTP, but can also be accessed like a "shared drive" using the appropriate software on the PC.

Don't forget that we also have this available -- at least on our Android devices. But also keep in mind this is much slower than WiFi. Nevertheless, it can be facilitated using apps like Bluetooth File Transfer.

The File Transfer Protocol also is an option. There are several apps available turning an Android device into an FTPServer...

Not the answer you're looking for? Browse other questions tagged file-transfer or ask your own question.

-2
Import pdf Files to Samsung Galaxy Tab S7
3
Browse or mount SD card over WiFi on Linux?
0
How can I transfer android data to PC (windows) given that phone screen is not working and I don't want to replace it.?