How to backup&restore Android device?

i've tried going into Settings -> Backup & reset -> Back up my data to ensure my phone is backed up. When the new device is first setup it automatically tries to restore settings from Google's Servers: 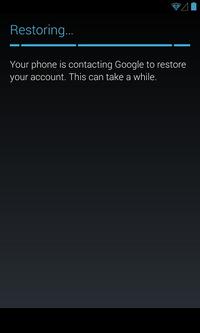 Except that not everything was restored. Amongst the things that are not restored are:

i've tried downloading an application called App Backup & Restore. But because there is no external storage on the Nexus 4, there is no way to copy the backup off the phone.

Also, App Backup & Restore cannot backup app settings for me. From the web-site:

Notice: App Backup cannot backup data or settings of apps for you

Neither can Quick Backup.

So my question remains:

How can i backup and restore my Nexus 4?

Note: i have no interest in rooting my phone, as that is now a criminal offense in Canada. And even if it weren't illegal; i'd still prefer the option that doesn't void the warrantee, risk voiding the warrantee, is irreversible, has the possibility of being irreversible, or changing the phone away from the original, stock, intended version of Google's own Jellybean.

As I already pointed out in multiple places, the integrated "Google Backup"...

In no way this "Google Backup" can be counted as a complete solution.

At least with Android 4.0 and higher, there is a possibility to do complete backups (and restore them successfully) -- see Full Backup of non-rooted devices. But this also has some disadvantages:

Other options for complete backups require root access on the device, e.g. Titanium Backup as the best and most famous variant. Same applies to other full backups like Nandroid via a Custom Recovery (such as e.g. ClockworkMod Recovery, mentioning the most famous example) -- and again, these can also be restored only completely (except you use just mentioned Titanium Backup for restore, as it also can read Nandroid backups).

All other solutions are not complete, but only cover parts. There are lots of apps to e.g. backup/restore single components like SMS, call logs, contacts. There are also apps which claim to create "full backups" -- but without root, that is impossible for an app. Still, one might succeed finding solutions for the most important data without requiring root access on the device.

I have used Wondershare MobileGo with good reults. Ther eis a free version and a paid version. Other usefull tools as well.WonderShare MobileGo How To

Not the answer you're looking for? Browse other questions tagged backup 4.2-jelly-bean or ask your own question.

341
How to fully backup non-rooted devices?
73
How to backup an Android device?
43
How do I perform a full pre-rooting backup of an Android phone?

2
Android Backup and Restore
0
Will after i batch restore on titanium backup will it restore to the same location?
4
How can I disconnect a phone from Google's data backup service?
1
Settings, App and Messages Backup AND restore of non-rooted Android 6+ devices?
0
Can't restore Nexus 6p Google Drive backup to new LG G6
0
Backup with root and restore without root
0
Can I manually reattempt restoring SMS messages from backup?