It is locked to work with only a specific carrier. I bought an unlock code, and unaware to this the previous owner got an unlock code from the carrier. Both are the same, so I suppose the code is correct.

When I insert a GSM SIM card from another carrier and turn on the phone, I get a message that roughly translates to "insert SIM network unlock PIN" (see image below). 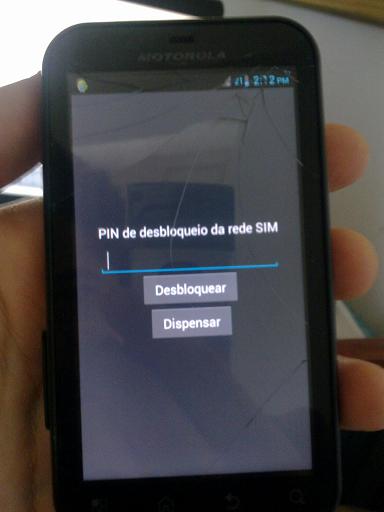 When I insert the unlock code, it blinks a message VERY fast, I can't even read it, then it says "failed on requesting network unlock", or something like that.

I have performed this more than 3 times, does it mean my phone is locked forever?

I have also been told to remove CM9 and reinstall the stock ROM in order for the unlock to work, but (1) I have no idea if this would actually help, and (2) I have never changed a ROM before and, althouh I used CM9 to create a nandroid backup, I have no idea how to reinstall CM9 and then restore the backup.

I have followed this guide and my phone is now unlocked.

I wouldn't recommend it for a beginner user, because it involves pretty advanced commands and procedures, and uses ROMs and tools from untrusted sources. Proceed at your own risk!

The performed steps were basically:

Phone is back as it was before, but unlocked.

There's a SIM Lock and Network lock - both distinctively different!

By the sound of it, a confusion arose, when it asked for the SIM's PIN code that requires to be entered - which is NOT the Network Lock code! It is selected and decided by the user.

In short, SIM Lock has a maximum count of three times to enter the PIN code and if unsuccessful and the maximum retry count has reached, the PUK (Personal Unblocking Code) code needs to be entered!

The PUK code can be found on the original SIM Card plastic accompaniment as obtained by the original carrier. If this cannot be found, the only way is to take it back to the place of origin, where the SIM card was bought and explain to the Sales rep about it and may be charged!

(Now, they could easily be suspicious as in "handling a stolen handset"... get the original proof of purchase from the owner, documentation etc to back yourself up just-in-case!)

Ok, after clarifying with the OP, who kindly showed the screenshot in their edited question, the message is slightly ambiguous which lead to my not being 100% sure if that message when fed into Google' Translator is saying "PIN unlock the SIM network." Do not know if that is saying SIM unlock PIN or network lock hence the ambiguity.

But further investigation lead to this thread, specifically post #3 which does back-up the OP's statement, despite the thread discussing about Samsung, I would guess the same thing may apply to the Motorola handset:

I have also been told to remove CM9 and reinstall the stock ROM in order for the unlock to work, but (1) I have no idea if this would actually help, and (2) I have never changed a ROM before and, althouh I used CM9 to create a nandroid backup, I have no idea how to reinstall CM9 and then restore the backup.

That makes perfect sense, as the stock ROM would know how to handle the mechanism as its built into it specifically for the handset, so yes, a revert to the Stock ROM would be required which would obviously mean another OP's question to be posted separately or by per-chance, a quick google-fu to yield on how to revert back to original.

If you enter wrong unlock code many times. Your mobile is hard locked. You are allowed to enter 5 times.

You need Defreeze code and then use network unlock code. Only unlock code will not work.

Obviously you have network locked phone and correct unlock code. The problem is somebody typed wrong code too many times and therefor the phone won't accept the unlock code.

Not the answer you're looking for? Browse other questions tagged cyanogenmod sim-unlocking motorola-defy .

2
How do I unlock an Optimus T? Is there a "vanilla" firmware I can use?
1
How to unlock Motorola Atrix 4G for other carriers?
2
Used code bought on internet to unlock Galaxy S3 from 3 UK to O2-UK. Will rooting the device harm it?
1
Determing SIM/network/carrier lock status in software
1
Mobile network not available on unlocked Active
2
Samsung I9300 - Network unlock fails