When I connect to my wireless router's client tables, my android devices is listed for example as: android_1234567890abedfc. I'd like to give it a more readable name.

To change the hostname (device name) you have to use the terminal (as root):

Then restart your wi-fi. To see the change, type uname -a

some devices needs reboot for work!

Depends on which version of Android you have.

Newer versions will use the right build.prop entry. Well, that is to say, Android reads the build.prop as it's normal boot process. Once the Connectivity Service runs, it checks to see if net.hostname is set in the Settings, then if empty, then it uses the "android_" + (permanent) android ID. So that's all you need to do.

Add net.hostname=HOSTNAMEHERE to /system/build.prop (Root may be needed). Leave a blank line at the end of the file.

Older versions, Gingerbread, Froyo, etc, just clobber it. It doesn't bother to check. It will set net.hostname to android_24412414... no matter what. So you will need to change it after that Connectivity Service has finished loading. Luckily, it only runs the startup once, not on every new connection. So we just need to run setprop net.hostname HOSTNAMEHERE after that for it to stick. Unfortunately, it runs fairly late in the boot process, so you need something that will make the changes on boot_complete. Most likely an App that runs by itself.

But then there is another issue.

The net.hostname setting, is not copied to the entire system! If you use a console/terminal application, you might not get the same hostname. My phone, a Samsung Sidekick 4G (semi-Galaxy S based) has an init.rc which runs hostname localhost, so all underneath commands will not see either your build.prop hostname or the android_id hostname! So you need to set that too.

Note: Depending on how you are doing it, you'll need to run the above command as root in order for it to work. Init.rc is typically on the read only system partition, so root access is needed to edit it.

The dhcpcd command, which is run to get a dhcp address, will not update to a hostname provided by the server (That can be fixed by adding the right dhcpcd-run-hooks and dhcpcd.conf), and it will not provide a hostname to the dhcp server if $(hostname) (The hostname command) is blank or localhost, and it does not internally use net.hostname. libnetutils is used for calling dhcpcd with -h "net.hostname", but if for some reason it decides not to call with -h, DHCPCD WILL STILL SEND THE SYSTEM HOSTNAME via gethostname(), as long as it's not "(none)", "localhost", or empty. On Stock Froyo anyway. Samsung screwed the pooch on some devices like mine. No hostname pass through, forced network time, etc.

My Solution for Gingerbread and below Samsung, Edit the DHCP Client Daemon config:

The last thing you can do is edit /etc/dhcpcd/dhcpcd.conf. If you add hostname YOURHOSTNAME to the file, it will use that, unless a hostname is given on the commandline. This won't fix the android_234etc issue, but will if the hostname is localhost (My problem, since Samsung screwed libnetutils and localhost in init.rc). You will need Root, but this works across reboots. This won't work if dhcpcd is called with -h Hostname option.

I found a way to do this on my rooted Nexus 7 with 4.2.2. The setting is saved persistently and works throughout reboots.
Source: http://nileshgr.com/2012/10/13/how-to-change-wifi-host-name-of-your-android-device

This works on CyanogenMod and probably other modified ROMs but not stock AOSP ROMs:

Go to Settings > Developer Options and scroll down to Device Hostname. Root is not needed. 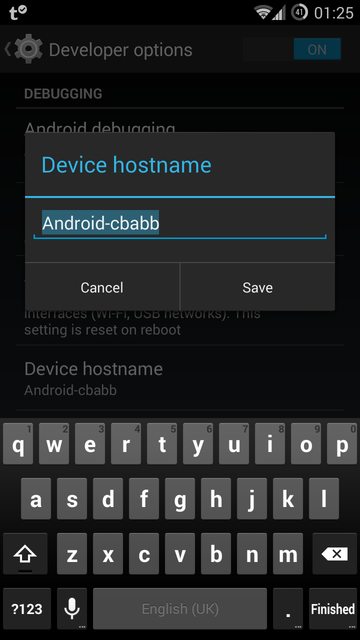 I have not ran stock in a long time but in Application Settings > Development you will see the option 'Device hostname'.

Hostname is used to easily identify and remember hosts connected to a network. It's set on boot, e.g. from /etc/hostname on Linux based systems. Hostname is also a part of DHCPREQUEST (standardized as code 12 by IETF) which a DHCP client (Android device in our case) makes to DHCP server (WiFi router) to get an IP address assigned. DHCP server stores the hostnames to offer services like DNS. See details in How to ping a local network host by hostname?.

Android - instead of using Linux kernel's hostname service - used property net.hostname (since Android 2.2) to set a unique host name for every device which was based on android_id. This hostname property was used for DHCP handshake (as added in Android 2.2 and 4.0). In Android 6 net.hostname continued to be used (1, 2, 3, 4) in new Java DHCP client when native dhcpcd was abandoned and later service was removed in Android 7. Since Android 8 - when android_id became unique to apps - net.hostname is no more set, so a null is sent in DHCPREQUEST. See Android 8 Privacy Changes and Security Enhancements:

net.hostname is now empty and the dhcp client no longer sends a hostname

So the WiFi routers show no host names for Android 8+, neither we can set / unset / change it.

However on rooted devices you can set net.hostname manually using setprop command or add in some init's .rc file to set on every boot. Or use a third party client like busybox udhcpc to send desired hostname and other options to router. See Connecting to WiFi via ADB Shell.

Not the answer you're looking for? Browse other questions tagged settings dhcp .

3
How can I rename my Android device?
12
How to change wifi device name on Android 7?
6
What is my phone's hostname/network name?
9
Connecting to WiFi via ADB Shell
4
How to ping a local network host by hostname?
2
Where is the "android_id" stored and when does it change?
2
Is dhcpcd used in newer Android versions? How to configure new DHCP client?
1
Change Phone name on Nexus 4
0
How can I know the hostname of an Android phone for use in SSH connection?
0
Android 9 on Sony Xperia XA2 not accepting any incoming connections on WiFi
See more linked questions

7
WiFi network not accessible with modified MAC address
10
Endless “Obtaining IP Address” loop
1
Change the date format of the default Phone app in Micromax canvas 4
2
HTC One M8 Network Name
0
How to lock some parts of Settings?
12
How to change wifi device name on Android 7?
0
What can be the reason for "internet may not be available" though the IP address was got
1
Is `device_idle_constants` deprecated in Android 12?