how to assign an app to an event?

I would like to use NFC tags with NFC Task Launcher or AutomateIt but I get every time I scan the tag a popup asking for the application to use (I have a few NFC related ones). I have a Samsung Galaxy S3 and a Galaxy Notes 2. There is no "always use this application" choice (similar to the ones I had when clicking on a link for the first time - which popped up an app panel with a choice of "this time only" or "every time").

Is there a way to force the assignment of an app to an event?

To understand the issue, you will need a little background on how this works:

For almost everything, Android broadcasts "events" -- such as e.g. boot_completed, SMS received, SD card inserted/removed, battery low... NFC signal received. Apps can register so-called "Listeners" with the system, which are bound to specified events. In your case, mentioned apps have registered for NFC events.

Now, when an event is broadcast, and there's no listener to it, nothing will happen. Is it a single app that registered a listener, this app will be called. If multiple apps registered listeners, the system looks if one of them is set to "Default" by the user; if so, this one is called -- otherwise a popup appears fot the user to chose which app should handle the event. Usually, this popup also holds a checkbox to make that app the default for this given event.

As said, usually there should be a checkbox -- which in your case does not seem to be the case. So it seems there's no possibility to define a default action for this event, whatever the reason. You could try apps from the playstore which do handle default apps (e.g. Default App Manager) -- but most likely this will not work either.

A second point to look would be in Settings → Apps → Manage Apps, pick the app of your choice, and see if it has the corresponding checkbox not grayed out -- if so, simply check it. Most likely, this will be grayed out, so you cannot do anything here either.

Next step would require root -- so if your device is not rooted, it's purely informational to you. As described above in "Background", all related apps have a listener registered with the system. So we should be able to un-register it. This can be done e.g. with Autorun Manager PRO (yes, it will need the Pro version -- as with the free you only can change 2 entries). 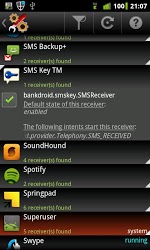 As the screenshot shows, this app can enable/disable listeners, so you can avoid having apps started automatically in situations you rather don't want them. Which would apply to yours: Find the corresponding listener, disable it, fine.

Without root, the only remaining possibility is to get rid of all but one of the apps. You could uninstall the others, or, if you'd rather keep them (and you are running Android 4.0 or higher), rather simply disable them in Settings → Apps → Manage Apps, so when needed, you can simply re-activate them at the very same place.

Not the answer you're looking for? Browse other questions tagged automation default-applications nfc or ask your own question.

12
I checked 'use as default' when choosing the default launcher, but now I can't start ADW.Launcher any more
5
Is there an app that associates a certain action to a arbitrary NFC tag?
1
How to start deskclock timer via NFC
4
How does NFC Task Launcher toggle Power Saving and how can I get Tasker to do it?
1
Dialog option “Use by default for this action” or “Always” not displaying
1
Llama event on manual profile change
3
Tapping an NFC tag which contains an URL. (How) can I override the default action (browser launch)?
0
How to write an NFC tag with Driving Directions?
5
How to assign default app to unlisted file type