I had my tablet at around 90% charge with nothing running on it and went to bed. I wake up in the morning to find it will not turn on. When I plugged it in the battery icon would appear showing it was charged, and would not display any charging animation. I tried holding the power button for up to a minute including with the volume keys and nothing would work. After letting it charge for an hour it finally came back on displaying 0% battery and the charging animation finally started after I turned it back off. I checked my battery stats later when I turned it back on to see that the battery instantly went from 90% to 0%.

What could cause my battery to drop from 90% to 0% as shown in the link below (click image to get to the gallery with connected screenshots)?

Basically I just want to know if I have a defective unit or battery (this has only happened once in the 3 weeks I've owned it) or if it's a known bug, or simple a glitch and not to worry about it. 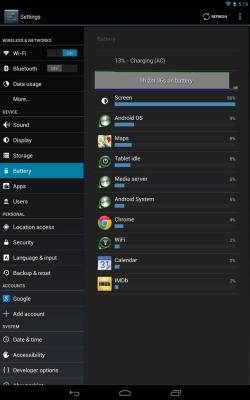 If it happened only once, it might have been a battery calibration error. This seems to be a defective battery. I would send the device back, if I were you. The drop seems to be too steep to be from a continuous drain (like WiFi).

The second image, which shows the battery go down to 0% shows that WiFi is what used all the battery.

It seems that the battery stats do not show its "progress" to 0%, maybe because the device was in "stand by" mode, but still connected to wifi.

WiFi is a big drain on your battery even when the device is not used. There are applications that will still use the data connected (wifi or mobile) even when the screen is off.

I've got the same problem since some weeks ago; it's the same, the wifi remains connected even when the screen is off...

One friend solved it removing the Outlook app but i'm not using it. (I'm suspecting The Simpsons game.)

Not the answer you're looking for? Browse other questions tagged battery samsung-nexus-10 or ask your own question.

40
How to deal with (orphaned) WakeLocks?