How do i find apps which weren't installed from Android Market

The Sky Go application will not work for me because it thinks my Samsung Galaxy Nexus is rooted even though I have never rooted it.

According to the Sky customer service agent I chatted to, this can be because of apps on the phone which weren't installed from the Android Market/Google Play.

I know that I have manually installed an apk or two in the past[1], but I am not sure which apps still on the phone (if any) were installed manually.

[1] Amusingly, the only app I can remember installing manually was the Sky Go app, when it wasn't available to download for Galaxy Nexus phones. It didn't work however, and I removed it.

The whole answer relies on the fact that when this query is made (requires adb) :

the installer for an app is listed in the output next to app's package name. We can filter the installer names in that output to single out apps not installed from Play Store.

Note: if you've a rooted Android OS, you may check /data/system/package.xml since the said command exposes the information found in that file, but in a more legible manner.

I found Tasker (user guide) apt as well as flexible for the job. Create a task named NonMarket and create the following actions inside it:

Run the task using the play button. Once the task ends check the file to find the content you're seeking.

I couldn't ignore command-line which makes the objective so easy to be achieved in this particular case.

Save the script under /sdcard into a file named nonplay.sh and run that file from a terminal emulator app in this manner: 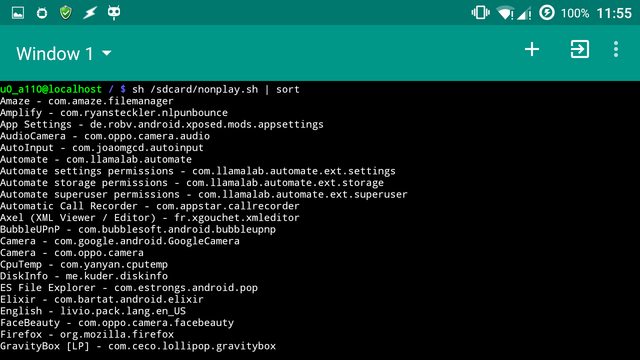 I find that the few apps I installed that were not from Google Play have their original apk in the Download folder. They usually ended there because I clicked an apk link through a website or blog I was viewing. After the download, the notification bar indicates the download is complete, and a click there starts the installer. I would start by looking into the folder

Not the answer you're looking for? Browse other questions tagged applications google-play-store side-loading or ask your own question.

141
How do you extract an App's data from a full backup made through "adb backup"?
56
What all does ADB backup and how do I restore part of it?
17
Obtain package name AND common name of apps via ADB
12
How to find app based on package name?
8
How can you determine what programs you installed last?
8
How do I install missing command line tools onto an Android device?

38
How Do I Know Which Google Account is Used for the Market?
3
Can I install non-market apps on my AT&T phone directly (without a PC)?
2
apps missing from My Apps part of Market
4
How to upgrade android market to Google play
0
How do I stop Google Play Services from being automatically installed?
2
Why does Google Play Store show installed apps in the "Previously installed apps" section?
1
How can I see which (system) apps are installed with which account?