Why are Dialer, Cell standby, and Phone idle killing my battery?

HTC G2 with Cyanogenmod 7.2.0, T-Mobile. It used to last all day, I'd always plug the phone in before bed and it would rarely run out of energy before then. Lately it runs out mid-day. 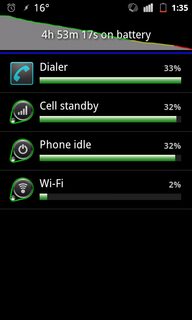 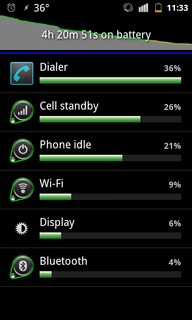 Today it was bad for an hour or two and then became normal (normal is a few percent an hour). You can see the abrupt change in the image below. I don't know why. The battery usage list looks identical to yesterday, so if it's due to an app, it's not a visible app. I realized I could click the graph and see a more detailed one, and it shows "Awake" during the part where the battery is being eaten while the display is off: 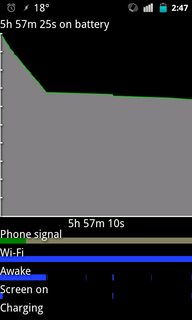 Is this a "wakelock"?

I did change the GSM preferences to "Auto mode" instead of "WCDMA preferred", but that was last night and it was still eating the battery quickly this morning for a while.

Batteries degrade over time. My last phone (Samsung Galaxy S Vibrant) would only charge to 93%. It would never charge higher than that. Near the end of my use of the phone the battery would only last about 5 - 7 hours. This is with disabling GPS, WiFi, Bluetooth.

Also, Something has to be the "highest" user of the battery. Since you disabled the stuff that is usually the big users of battery, something else is taking that spot.

I would say try replacing the battery, you can get a new battery for the G2 for about $22.

Emphasis mine. But note that it does "not charge as much". Android will still report that the battery is at 100% because it is. It is charged to the full capacity that the battery can handle. This is why it doesn't seem to hold a charge for as long as it used to.

Your battery is over 2 years old. Read this post from XDA about Li-Ion batteries that it quotes this site as the source.

The fact is, your lithium-ion battery starts dying the moment it leaves the factory! Of course, the actual life-span of an unused lithium-ion battery can vary by a fair amount based on its internal charge as well as the external temperature. But suffice to say that you can expect to irreversibly lose 20% of a lithium-ion battery’s charge every year from its original date of manufacture.

Other things can even make these numbers worse. Like frequent discharges, keeping the battery in non-optimal temperatures and leaving the battery "sitting" idle for periods of time.

Not the answer you're looking for? Browse other questions tagged cyanogenmod battery-life htc-desire-z standby cellular-radio .

3
Galaxy S3 cell standby is eating my battery
72
What is *Cell standby* and how can I keep it from eating my battery?
1
Beside shut down the phone, are there ways to prevent battery usage for Call Standby?
7
Why has my GSIII's battery life dropped from 50-60 hours to 16 hours?
1
GPS Battery Drain -- LocationManagerService
0
Samsung Galaxy s3 Battery life
0
100% CPU load, battery drain with no app minimized/running in the background
1
How to troubleshoot/debug slow phone that burns battery?