I am using the steps below: 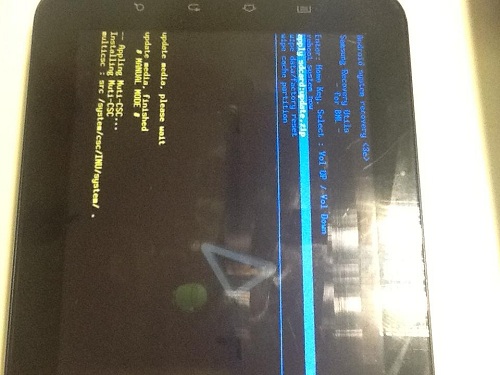 After selecting Apply sdcard: update.zip, I'm getting the screen below. But it shows it for long time. There is no response from device. We waited for 5 hours. No response. 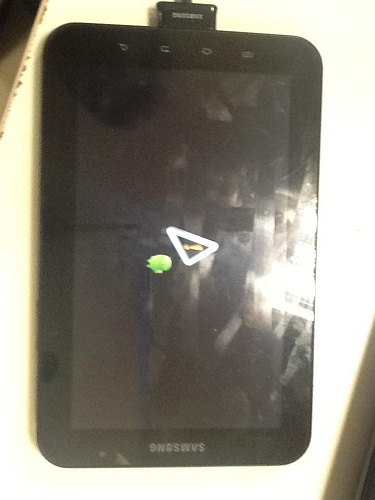 How can I flash my Samsung Galaxy tab? Let me know if I am missing a step.

These are the steps to install/update a custom ROM from stock:

There is a log of "apply update.zip" function on cache partition. You can check what went wrong there.

But it would come down to three possibilities:
the update.zip is broken,
not compatible,
or signature failure

Looks like you have custom recovery, so the signature failure shouldn't be your case.
It would happen if you'll try to do "apply update.zip" of custom update.zip using official recovery.

Unless you really need to use update.zip for updating, I would strongly advise against this method.
The recommended way is to flash full firmware with Odin. guide1, guide2

Officially the update.zip method is used by OTA updates. While the device is actively supported, it will download update.zip files in background.
These official update.zip files are signed and applicable only on version of FW, which they are meant for.
The update.zip file which you have is probably made by a MODder.
Although the update.zip file could contain all files and partitions of the target firmware version, this is seldom the case in custom update.zip files. Because of this, you might get different results applying custom update.zip on a devices with different firmware version.
It might work as intended, or might start freezing, or even fail to complete the update in case there is a command referring files or folders which don't exist or are different on your original firmware.
In many cases, not all partitions get updated and the part of firmware in SYSTEM partition is not compatible with bootloader present in another partition.
This might result in boot loops, very long boots, freezing, or random reboots.

If you don't specifically require version 2.3.6, you should consider using alternative builds, as the cyanogenmod for p1000 which is currently in its KitKat version v4.4.

KitKat plays very nice with devices with smaller memory, and you'll also be able to use Chrome and other Apps, which are not backward compatible. Overall, it's like having a new device.
Bear in mind, that the cyanogenmod is also distributed using update.zip files, the name of zip is different but it's still "update.zip type" file, so it's also important to apply the update from supported firmware version. I did the update from P1000XWJU6

Not the answer you're looking for? Browse other questions tagged updates adb samsung-galaxy-tab or ask your own question.

4
Samsung Galaxy 7" (GT-P6210) USB debugging is not detecting in Linux?
1
How can I update my Galaxy Tab to 2.3?
2
Restoring original 2.2 firmware on Samsung Galaxy Tab GT-P1000L
3
Samsung Galaxy Tab 7" Plus -- adb drivers
0
How do I convert a NANDroid backup into an update.zip file that works in the stock recovery mode?
4
My tablet is stuck on "no command" screen. What can i do?
1
ADB Sideload Password Reset on Samsung Galaxy J3 2016 on Sprint?
1
How to install LineageOS in TWRP using `adb push`?