Is it possible to pre-download a YouTube video to view it later offline? [duplicate]

I have the Galaxy S3, and I'd like to watch YouTube videos during my commutes. I like to watch long videos (around 1 hours), so I have no more than 1 video per commute.

However, youtube video takes a lot of bandwidth and I have a cap on data usage. Besides, connection outside during peak hours tend to be slow, which makes the video pause to download a lot of times.

Is it possible to pre-download a video at home (using my Wi-Fi, which is faster and has no data cap), and watch it on the way? I tried pausing it at home and let it download, but whenever the phone sleep (it sleeps often!), or the application switch from youtube to anything else, it seems all previous download will be lost.

YouTube's official app allows you to preload a video. You can either preload all your subscription or the videos you have added to watch later.

When your phone is connected to WiFi and charger, Youtube automatically pre-loads them.

One thing to note is that this still requires data connection to view the pre-loaded video. It won't download the videos but it does something (may be verification) before showing pre-loaded videos. 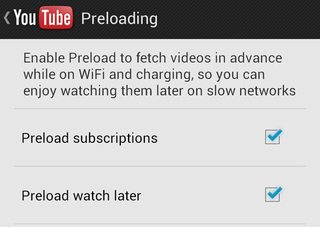 There's a Python script floating around called youtube-dl (which is an open source project), an example invocation would be something like this:

depending on the video format, either MP4 or flv, the file would be saved to disk as 'O1MIVOTstF0.mp4' or 'O1MIVOTstF0.flv'.

It is cross-platform friendly, and can run under any environment provided the Python run-time is installed.

Then push that across using a video player on the handset to play the youtube video - that is off-line, thereby minimizing data caps limit.

Addendum Am not 100% sure if Android has a video decoder for flv format... so that is an open ended question depending on what video player can support it.

Assuming you also have a PC at home, most modern browsers have extensions that will allow you to download a YouTube video, which you could then side load to your S3 and watch in airplane mode, if you liked. I know Opera has an extension that allows YouTube downloads and I assume other browser do too.

Just download them over wi-fi and watch 'em on the go. I find it too hard to view a video on a small screen for too long, but this might do the trick.

There are a couple on the Google Play Store. Search for youtube mp3 and you will find them.

Best one I found is MP3/Video Downloader - Grab It.

It's really simple to use. You can search YouTube and then download music in video or MP# format. Really nice app!

There is a new app called TubeDroid that will enable you to download videos to your device, rather than preloading them.

Not the answer you're looking for? Browse other questions tagged youtube or ask your own question.

7
Download YouTube Videos from Mobile?
3
Is it possible to pre-download a YouTube video to view it later?
1
What is the status of YouTube's offline viewing feature for non-music videos in 2015? (after Music Key was launched)