Files with names with unicode characters get corrupted in SD Card

When mounting my SD Card on my galaxy SIII files and folders in the card with characters that aren't in the ASCII range get corrupted. This happens by simply selecting 'Unmount card' in the Storage settings and mounting back. No need to physically remove the card and putting it back in. Turning the phone off and back on results in corruption as well.

Folders when viewed with a file manager on the phone show up as 0-size files with a date of Dec 31, 1969 (which is the linux epoch) and can't be navigated into to see their contents. They shw as empty folders. Files turn to size zero with that same date and can't be opened nor show in Gallery, music player etc. They open as an empty folder. (See image below)

The card is a SanDisk 64gb micro sdxc card (class 10). The issue ocurred when the card was factory-formated (with exFAT) and also after formating with the phone (settings > storage).

Examples of filenames that cause folder corruption are "Aṣa" or "דניאל". It makes no difference if the file was copied to the card using usb transfer or by taking the card out and using a reader on a Windows PC, or if the name was changed (using the phone) once the file was on the card.

Files with those same names don't get corrupted if they are in the internal phone memory and I can use them without problem.

When taking the card out and using it on a PC with Windows 7 files can be seen. But sometimes the affected folders appear duplicated. That is, twice with the same name both. Checking the disk with windows reports errors and attempts to fix them. But then when putting the card back in the phone the files are corrupted again.

How can I prevent this corruption from happening? 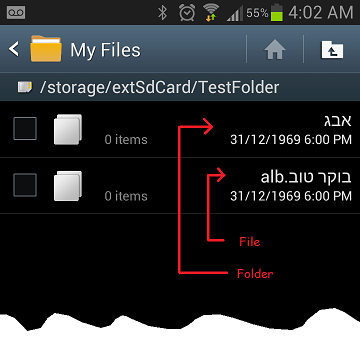 Update: with a 2GB card formated with FAT32 files didn't get corrupted. But after I formatted it to exFAT I could reproduce the file corruption. I think I can rule out a bad sd card.

More info, this is a report from Windows 7 after running checkdisk. Note that the 3 files existed in the TestFolder directory, which was corrupted:

Folders don't get corrupted if they are created on the phone with hebrew names, then unmounted and checked on windows. Only after re-mounting on the phone.

MORE DATA: this is I think relevant info from adb logcat:

And from adb shell I can try and see the troublemakers (after remount, note 2 directories with apparently the same name, which in a windows console seems to be output as 2 characters per unicode character):

I updated my S3 from Android 4.1.2 (stock Samsung ROM) to 4.3 a couple of days ago. The problem had happened consistently for me for a year and a half, exactly as described above, in two 4.0.x (ICS) versions as well as in Jelly Bean 4.1, but in 4.3 it appears to finally been fixed: After the update I copied many files with Unicode Hebrew names to my microSD card, and they have survived numerous unmount/remounts of the card & phone restarts with no issues.

Incidentally, another issue I had been encountering was that automatic rescans of the media folders on the card (done by Android's "Media Storage" system app), which occur every time a card is inserted or the phone is disconnected from USB, were taking a very long time (sometimes hours). This in turn caused issue with syncing my large music library between my Mac & phone using the iSyncr utility. This issue has also completely gone away, and I suspect that the Android media scanner wasn't dealing well with the corrupted files.

Additional Details: Phone: GT-I9300 International version, unrooted, running the official Israeli unbranded Samsung firmware. Card: SanDisk 64GB Class 10 (same as original asker's IIUC), formatted to exFAT on a Mac. I didn't even bother reformatting after the 4.3 upgrade -- I simply mounted the card on the Mac in order to erase all the existing corrupted 0-length files, which as noted cannot be deleted by the various Android file utilities.

I have experienced the same with my 32gb Sandisk Micro SD card 10 class using in the Galaxy Tab 2. The SD card is genuine so I know that's not the issue.

However, I have found this to work for me.

The card should AUTO MOUNT via the Paragon NTFS app when the device is turned on.

I've tried every method possible to have the SD card in the FAT 32, but it just doesn't last, folder names change, files disappear.

According to the Samsung site it was a bug that is now fixed and due to be released in the next firmware update (whenever that might be).

You have no other solution but to buy another one. You're welcome. ;)

AmineAmine
1
Add a comment  |
Highly active question. Earn 10 reputation (not counting the association bonus) in order to answer this question. The reputation requirement helps protect this question from spam and non-answer activity.

Not the answer you're looking for? Browse other questions tagged samsung-galaxy-s-3 file-system external-sd or ask your own question.

4
Reason SD cards come FAT formated instead of Fat32?
2
Filesystem format used for SD Card by Galaxy S3
2
Recovering broken ecryptfs on SD-card with lollipop
1
Apparent duplicate folders/files accumulating on external SD card
1
Why is Android 5 corrupting my SD card (moving files to LOST.DIR or losing them)?
1
How to fix corrupt exfat SD card on linux?
3
How to create and use multiple partitions on external SD card with different filesystems (Ext4, exFAT, NTFS)?