Use an Android tablet as a Wacom drawing tablet for a PC?

Since a nice Wacom tablet is a bit pricey, especially for someone like me who doesn't do much graphic editing, I was wondering if it is possible to use a tablet (i.e. my Nexus 7) as a Wacom-esque drawing tablet when connected to a Linux computer?

I did a bit of searching, however most of the info I found is for using a Wacom tablet on an Android device. I've never used a Wacom device, however I have been doing some graphic editing in Gimp, and think it would be much easier than just using a mouse. And since I have a Nexus 7, it seemed like the logical place to start. I would have to use the Nexus as a USB peripheral for the computer, and I don't know if it is possible to transmit the touch screen coordinates to the PC.

If anyone can point me in the right direction, I'd appreciate it!

The GfxTablet project should allow you to do this. It's network-based rather than USB though.

A touchscreen tablet is not like a Wacom tablet. Drawing tablets use a stylus with one or two pressure-sensitive tips and several buttons. The stylus is also sensitive to the angle you hold it at, and the tablet can detect when the stylus is hovering above the tablet, even with no contact. A drawing tablet has a resolution of a fraction of a millimetre. You can wield the stylus like a calligraphy pen, an airbrush, or anything in between.

A capacitive touchscreen such as you get on a Nexus 7 is designed to detect fat blobs like finger tips. It can't react to you hovering over it, to the natural pressure changes you get over the course of a stroke, or to the angle. Samsung's Note series has a pretty advanced stylus, and it makes a nice drawing tool, but it still lacks the advanced features like angle sensitivity.

Sure, you can use a touchscreen to draw and to create artwork, but asking it to replace a Wacom tablet is like asking finger-painting to replace the whole range of artists' paintbrushes. You'll never be satisfied with the results.

The Virtual Tablet app is free on the Google Play Store. It works with some flaws but overall good. See the developers site for more information

I had the exact same wish as you, and I eventually found a solution I was happy with. It does not solve it in 100% the way you had envisioned, but let me see if it helps you.

That worked. However, there are some issues with cursor sensitivity, and (depending on which remote software you use) you usually have to make a custom "gesture" to draw. Not very elegant. Also, there was usually considerable lag.

The solution I found was to simply use a collaborative drawing app called Explain Everything" that runs on both desktop (Web) and Android (app). Then I just collaborate with myself on both the desktop and the Android-device. 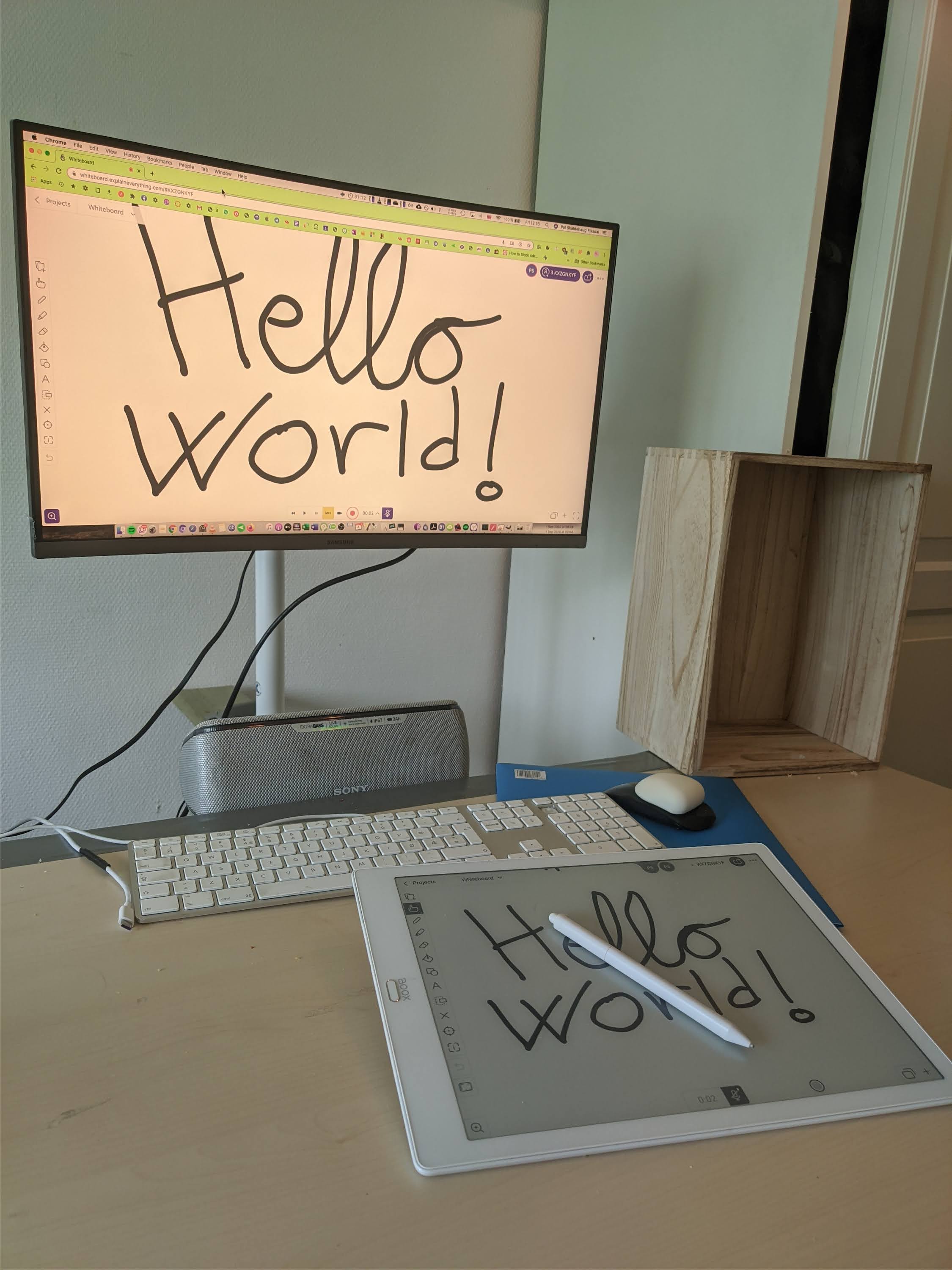 The device in this photo actually has en e-ink display, but in practice that has no significance, as it runs Android and is for all intents and purposes just an Android tablet with different display technology than most.

Now, I realize that you may have some specialized software on the desktop, and that may be your whole reason for asking this question. Thus, you may not wish to use this particular drawing solution. Therefore, I admit that my answer is not perfect. However, you can export whatever you draw in Explain Everything as vector graphics, and import it into whatever software you prefer for further processing.

I have not yet used Explain Everything for serious drawing, so I can not vouch for its quality. However, there are a multitude of collaborative drawing apps that work both on desktop and on Android, so you can choose whichever suits you best.

Actually, I found that Microsoft Office for Android actually has decent drawing capabilities, and it can sync live with the web or desktop version of Office. A bit laggy with the sync, but good enough for me. I am switching to that now because I found the interface of Explain Everything to be a bit confusing.

A Samsung Note II has all of what you are looking for. It uses pressure sensitivity like a Wacom, and it even has a Wacom digitizer built into it! Doing some research now, apparently there is an app that allows connection to a PC for that purpose exactly.

This video gives some great ideas, but simply, all you need is a art program [gimp is free] and a way to control the program with your tablet and pen tool [ teamviewer ]. While probably not for the advanced pro digital artist, a great idea for anyone just learning.

For this I use AIRDROID which turns a tablet in a third display for me, on which you can diplay your 'edit' window of the programs you like to use

The answer is a combination of YES and NO. You can use your android tablet to simulate a secondary display, and control it using the touchscreen. Twomon (http://www.easynlight.com/en/twomonusb/) is a software that I personally use to connect my tablet to my computer as use it as a secondary display. Twomon works over USB, so you don't need any additional hardware adapters to get it working.

However, graphic tablets, like Wacom are built for precision drawing, and general-purpose tablets are not. So, I am not sure that this makeshift solution would be as effective as a Wacom (or other) graphic tablet.

There is this recent project: Weylus. From the description:

Weylus turns your tablet or smart phone into a graphic tablet/touch screen for your computer!

The above features are available on all Operating Systems but Weylus works best on Linux. Additional features on Linux are:

Not the answer you're looking for? Browse other questions tagged usb tablet nexus-7 linux drawing .

2
Drawing on Nexus 10 to Windows 8.1
0
How to turn my android to a wacom tablet?
0
Can Android Tablet can work on Windows 10 like Wacom Tablets?
0
Using Galaxy Note 2 and stylus to draw in Photochop CS6 on Computer
1
Using a stylus on my Android device

8
Use Galaxy Note as digitiser tablet for PC
3
How can I webcast a live drawing session with Android?
0
how can i use an android tablet that I am locked out of
1
RCA maven pro Android tablet not totally recognizing USB drive