How to increase internal memory of the HTC Wildfire S finally?

I've been spending a lot of sleepless nights trying to fix this. I know there are a lot of threads like this on the internet, but I want to go a bit deeper.

I have an HTC Wildfire S with only 512 MB internal flash memory. This internal memory has a partition layout allocation around 130 MB for the /data partition and around 290 MB for the /system partition. Both of them are full. (In addition I got a 16 GB SD-card.)

Installing apps, upgrading apps, running most of the apps - impossible.

Now, I knew it's possible to move apps to SD-card, the so called apps2sd procedure which offers very limited functionality to move some of the application data to the SD-card. Anyways after moving every possible data to SD the internal memory was still full and the phone unusable.

I was reading about more sustainable methods like data2sd. I gave it a try. I used the instructions from htcdev.com to unlock the bootloader, I installed the latest ClockWorkMod Recovery and rooted the device permanently.

Finally, I used the rooted device to install Android 4.1.2 AOKP Jelly Bean Custom ROM and Data2SD like discribed in the linked articles. But I was stuck the device was not booting until I removed Data2SD. The AOKP-ROM was working pretty well and stable, but installing Data2SD simply did not work in combination with Jelly Bean (SD-card formatting: 11 GB FAT23, 4GB ext4 and 256 MB Swap).

Now, I tried to go for the link2sd approach. I reformatted my SD-card (14 GB FAT32 and 2GB ext4) and installed Link2SD on my phone as described here. I was able to move additional data and apps to my SD-card and could link some apps to the card.

And now after some days playing around with all that usefull tipps from the internet, for example this thread: What can I do to manage my phone's internal storage? - I am at the point where I started. This is my result: Internal memory is still full and the phone is still unusable. (I would love to post a screenshot, but taking screenshots simply does not work currently.) 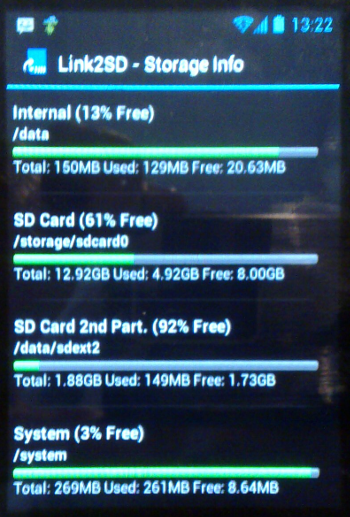 How to finally fix my internal memory on the Wildfire S? Why is Data2SD not working with the Jelly Bean ROM and why is Link2SD so ineffective? Is there anything I'm doing wrong?

The main problem seems to be the Dalvik Cache on the /data partition (around 100 MB). Is there any way to completly use the SD card to somehow get partitions mounted at /data and /system?

The reason link2sd being not effective is because it moves all but data to sd-card. If any of your app uses huge data it will fill your internal space quickly.

Try going to Settings -> Apps -> Sort by data size and see which apps are on top and try clearing their data. This will free some space for some time but also clear that particular app's data.

As you've pointed out installing Dalvik cache to SD would be best. In my custom ROM I've to open terminal and type a2sd install and supply option y,n,y. Most probably this will work with your ROM as well.

I'd check what's taking up so much of the internal memory. I use SD Maid app, and use these functions: corpsefinder, systemcleaner, appcleaner, duplicates, biggest files.

When I couldn't install Google Maps after reflashing my CM10.1 with the latest nightly, I used the biggest files and delete some files I'd downloaded before (other nightlies that I've saved). I also deleted some files that were no longer being used. When I was done, I was able to install Google Maps.

I would recommend using the App2SD app (available in the Play Store), not Link2SD. Link2SD hasn't been updated in a long time and appears to be a dead project.

If possible, install SuperSU 2.22 or above (may already be installed) and create a second ext3 or ext4 partition on your external SD. This can be done with a desktop application or with the tool bundled with App2SD (haven't tried this myself, I use Roehsoft Partition Tool for its many powerful data related features, but it's kind of expensive for an Android app) The primary partition can remain as FAT (so it's still readable by Windows.

Now create a mount script with App2SD using the su.d method. It will provide the best performance (Link2SD doesn't support this). If you reboot and the partition mounts without any errors, you may now move your apps to the second partition. You can move everything: APKs, libs, dex, data, cache, external data, etc. The only limit is with system apps; the APK must remain in the privileged folder.

I hope this helps you.

113
What can I do to manage my phone's internal storage?