A way to get the current resolution size and DPI from the command line/terminal/adb?

So I know that I can override screen density and screen resolution with the am command provided with Android. That's great and dandy, I guess. But is there a way to grab those two numbers from the command line? I know the pm utility can do some information gathering, most notably pm list features to see if the Android device has wireless, bluetooth, gps, etc. pm doesn't seem to do much more information reporting than this, though.

It would be helpful to know what versions of Android that the command is supported for. Ideally I would like something that works on Android 2.2+ (Froyo), but taking something that only works from 4.0.3+ (Ice Cream Sandwich) is fine too. I would also like it if there was a way to figure this out without root access.

I know that it's possible to get the screen resolution and density programmatically, as described in this question.

adb command-line screen-resolution
Share
Improve this question
edited May 23 '17 at 12:40

In Android versions equipped with wm tool, you can use the commands: 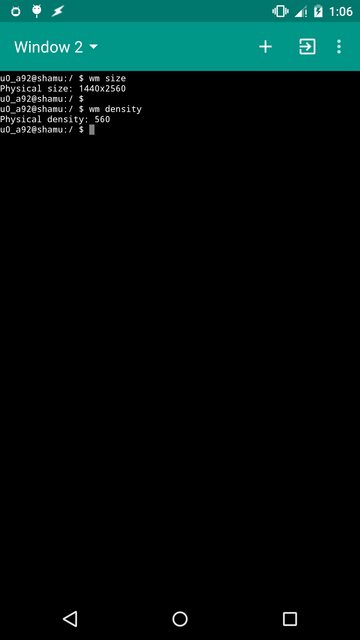 I've tested successfully on stock Android 5.x and 6.x. Since wm tool comes with Android 4.3.x and 4.4.x as well, the solution may work on them as well.

If display service isn't available in dumpsys, you may look for line ro.sf.lcd_density= into /system/build.prop. To get it from phone:

Not the answer you're looking for? Browse other questions tagged adb command-line screen-resolution or ask your own question.