I have a major problem that I hope someone can help with. On my Google Maps feature under my Location History it shows a location that I was never at at any point, but when my wife happened to see that location she doesn't believe me that the GPS could be wrong and pinpoint that location if I was never there.

I was first wondering myself how could that could be possible if I was never there or my phone was never at that location that was 35 miles away from me and second is there any way I could prove the GPS being wrong? Can I contact Google Maps and can they give an official printout of that certain day and every location I was? I really need to prove my honesty to her and hope there is a way.

The following location data sources may be used to derive location:

Note: When Latitude is running in the background, it will default to cell ID (cell tower) location on most phones to preserve your battery life.

So if you didn't have Google Maps open for any reason at the time of the erroneous location, it will have defaulted to it's least accurate location finding service, that depending on the density of cell towers in that area (generally more dense in urban areas, less dense out in the countryside) could be out by several kilometers.

If you visit the Location History page in your Google account on a PC, at https://maps.google.com/locationhistory/b/0 then it should show a similar map and listing of places as you see on your phone, but you can also click each recorded location to see how (in)accurate it was. When you click the blue dot for a location, Google draws a blue circle around it that shows approximately the (in)accuracy of that location fix. 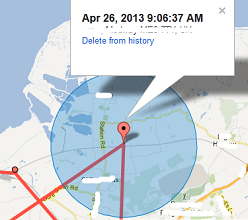 The picture above shows an inaccurate fix that covers 3 villages, and a number of roads (I was actually on a train at the far southern edge of that blue circle).

As long the problem location fix has a large blue circle around it, and you can account for being somewhere in that blue circle then you should be ok.

That's most likely not a GPS position, but rather a WiFi hotspot. Google's location service makes use of different identifiers:

While GPS should be quite accurate (bad conditions might give lower accuracy, but usually shouldn't place you too far off), and cell towers usually are not moving -- WiFi hotspots may exactly do that. I will give you an example situation to understand:

Say, Google's "StreetView cars" passed my house/flat in NYC 2 years ago, while my homy WiFi hotspot was turned on. So they recorded my hotspot's SSID, and connected it with the current GPS location. 6 month later, someone passing by my NYC home with "network location" turned on, gets a fine (and relatively accurate) position from that: location service asked Google's database about my hotspot's SSID, and got the coordinates back.

Fine, so far -- but a year ago I decided to move to San Diego. I completed that 6 month ago, and set up my WiFi hotspot again. Now you pass by my house, your device detects my SSID, asks Google for that hotspot's location... and suddenly you are in NYC, as Google did not update its database yet!

That's how it mostly happens -- and that's how I traveled hundreds of miles in a few seconds a couple of times (my ears still ringing from that acceleration, as I also traveled back a few seconds later)...

To prove you're unlikely having been there, check your other stored locations and check their timestamps. Try to find some with a timestamp close to the wrong location. Once it turned out you must have traveled light-speed to make those data becoming true, the error should become obvious.

If you click on the dots, you will get the time it recorded you there. If it is 35 miles away, and it is within minutes of the previous location, then it would be impossible for you to be there in less than 1/2 hour. I also agree with the others about the Wi-Fi. I was traveling in Michigan this week, and there is one point in Las Vegas that shows up just 10 minutes after the previous position in Michigan. Someone's internet connection was being sent out to the network from Vegas.

Not the answer you're looking for? Browse other questions tagged google-maps google-location-history or ask your own question.

4
Google Maps show location history where I've never even been
-2
Gps mistaken my location and get me to trouble
2
Google location history... wild anomaly
2
Google location history wildly inaccurate
0
Do hotels send out wifi signals that place you there?
0
Google apps timeline inaccurate location
1
One of my phone's last location is in different continent
0
Why does my Android phone think it was in Japan?
1
Google timeline telling me I was somewhere that I wasn't
0
My locations on my google timeline are showing places i never been,and now my bf thinks im cheating
See more linked questions