Can I install Ruby and Ruby on Rails on an Android?

Aware that this is a bit mental, but can I install Ruby on a Galaxy S4 running Jelly Bean 4.2? A console where I can install gems, rake routes and run the Rails server, and browse to my application by putting 0.0.0.0.3000 into Chrome?

Would be excellent for testing little ideas and concepts I have while on the go!

The Android Scripting Environment said to plan on Ruby. Might be worth a check how far they got; at least they're tagged "JRuby" at Google Code. According to their project page:

Scripts can be run interactively in a terminal, in the background, or via Locale. Python, Perl, JRuby, Lua, BeanShell, JavaScript, Tcl, and shell are currently supported, and we're planning to add more.

But be also aware of:

SL4A is designed for developers and is alpha quality software.

An interesting article on this topic which you might want to read is Hacking Android during the holidays. It describes an (successful) attempt to setup and use SL4A to be used with a.o. Ruby.

this can be done 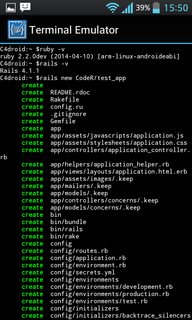 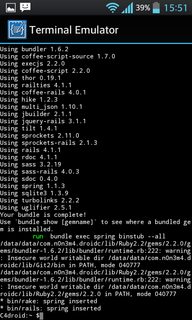 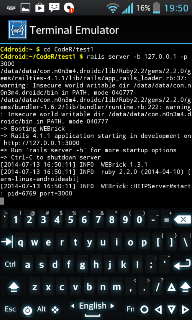 As for ruby, you may try Termux.

With batteries included. Can you imagine a more powerful yet elegant pocket calculator than a readline-powered python console? Up-to-date versions of perl, python, ruby and node.js are all available.

In theory, yes you could do this, but there would be some significant limitations. You'll almost certainly need a rooted Android device.

For instance, you wouldn't be able to just gem install anything and have it work. The problem is, the phone is too resource-limited to run a compiler, so you can't compile either Ruby, or any gem that needs native libraries.

So the first way I'd go about this would be to cross-compile ruby and RubyGems with the Android NDK and then side-load them onto the device. At this point you've got ruby and gem and can start experimenting.

Actually, I modified CyanogenMod to create empty "/bin, /lib, /usr, /var, /svr, /home, /media, etc, etc" and then modified "${source_root}/system/core/include/private/android_filesystem_config.h" to include rules for the directories and then modified my external sdcard so it wouldn't mount as fuse or with the sticky bit set (it would set root:sdcard_rw ownership to all file inside) and after start up I ran a script that mounted the Linux arm root directories on the external sdcard to the empty versions in Android's root. The embedded version of glibc was used with a Kali Linux armhf chroot image I created, but it didn't have ruby or metasploit. So I followed some directions about compiling ruby 1.9.3 with svn or something and then used that to install metasploit, the only thing was that postgresql didn't work because socket and file creation are very permission sensitive and sockets may have been involved, so no postgres database, have yet to try to connect to a db on another host though. Apache2 worked, I did the whole /etc/init.d/apache2 start and viola, "It Works!" you know that if you've seen it.

So in short, yes, you can compile ruby and many more programs on Android, glibc just has to be available, ie /lib directory and contents on Linux.

And as a side note, I used a Galaxy S III Sprint with 2GB of RAM. Python works great, I just started experimenting with Unix sockets with python, they connected in /sdcard but I need to learn more about Android's security policies on sockets and database creation before I move any further with getting metasploit and working with a database working on Android + glibc.

Not the answer you're looking for? Browse other questions tagged development or ask your own question.

65
How can I do development on my Android device?
0
By accident deleted /dev folder on android (LG G2 phone). how can i bring back system to life?
1
Can you test apps on a google locked phone?
0
How to use Visual Studio Code on an Android device?