Why are some USB chargers slower than others?

It seems with USB chargers for my android phone, not all are created equal.

The first pic is the official charger which came with my phone (galaxy nexus). It charges quickly, from 0 to 100% in a couple of hours max.

The second pic is a cheapy I got on ebay to use at the office. It works but it's slow as a wet week, can take 6+ hours to charge and if I use the phone while it's charging, it seems to drain faster than it's being charged.

The two chargers below seem to be the same spec (5V / 1A) and from my limited understanding that P = V*I they should provide the same power, right?

What else do I need to look for when buying a charger, and is there any way to tell in advance if it is going to be slow or fast (apart from testing them out)? 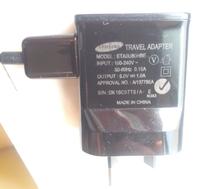 Lies, damned lies, and equipment specs. I can print up a lovely sticker that says it'll output 1000A. Doesn't mean it'll output that.

It's significantly cheaper to make a low-power supply than it is to make a high-power power supply. Making the latter means you need a bigger transformer (with heavier windings), larger capacitor(s), larger inductor(s) and higher current rectifier(s), all of which add up to more money. If you're trying to make stuff on the cheap and aren't worried about pesky things like ethics, you'll go with the lower end components and massage the specs (by testing at low temperatures, etc. This is especially common with computer power supplies which specify output at 25C, even though they would actually operate at ~40C unless you're using them inside a refrigerator), use theoretical values rather than actually testing the product (saving money on QA), or just outright lie about the specs, the latter of which is probably the case with this charger, for reasons below.

One big red warning light that your charger is substandard is that the CE mark (which is used to indicate conformance to EU standards) is fake. The shape of the letters and their spacing is wrong. A real CE mark should have the letters each forming a half-and-a-bit circle and should link up if you continue the arc, as shown below. A cursory glance at the mark on your charger shows it looks nothing like this.

Other warnings signs include having no manufacturer listed and improper capitalization (should be mA, not MA, unless they're claiming is can supply a billion amps.).

In essence, to determine if a charger is likely to be substandard, apply the same thoughts as you would for determining whether a product is counterfeit. The only real difference between a substandard product and most counterfeits is whether a manufacturer's label is forged or not.

Aside from the actual power provided, there's another variable: Whether the device RECOGNIZES that the charger is capable of putting out the rated amps.

Devices have some different strategies for recognizing what rating a charger has. Now when connected to a computer, it's easy - the numbers come across during USB enumeration. But when connecting to a dumb charger, it's harder, and you don't want to try to draw too much, as that will cause the charger's over-current protection to kick in and cut it off.

I know that Apple uses a specific set of resistors in their charges to produce specific voltages on the USB data lines. Their devices then look for those voltages and take them to mean that they can draw some larger amount of current.

The problem with this is that there don't seem to be a lot of standards on this detection - different devices seem to do different things.

I'd guess that your cheapo-charger doesn't do whatever the galaxy nexus requires to recognize that the charger is capable of 1 amp, so it doesn't try to charge at the higher rate.

Just like resistors, chargers have error margins, it's just not written on them, simply because it should be negligible in the case of known brands. Your phone will not even charge if the charger is deviating a lot from the designated voltage. It's not even supposed to harm your phone because modern phones have fail safe measures in them. Now if the charger is having the right voltage, the speed of charging is dependent on the amount of current it passes. And here is where the problem lies with cheap chargers. Cheap components affect the amount of current passing through them.

If smartphone is taking longer with cheapy charger for full charge, it means that the cheapy is giving less power. There's no exception or loophole with that. Grab a multimeter and measure the output by your own.

In this case, the printed specs (5V/1A) may simply be wrong or there may be other things like cable, connector etc which are screwing the output.

Even 10A charger will not fast that fast because Android recognized your charger as 500mah.

Workaround https://dangerousthings.com/shop/android-fast-charge-usb-cable/ Or by shorting DATA+ and DATA-

Not the answer you're looking for? Browse other questions tagged battery charging .

16
Are Android chargers universal in terms of power (Voltage, amperage)?
5
Samsung Galaxy Tab, charging technique through USB Cable
3
Device Steadily Discharging While Plugged Into AC?
0
s6 won't fast charge or connect to pc
4
Why do charging rates differ for similar spec USB power adaptors?
1
Can I charge my phone with many different charger speed types?
2
How do I disable rapid charging?