As Dan insisted in his comment, here as separate answer:

Narayanan already mentioned in his answer that each cell tower can be identified via its "CID" (Cell ID), and there are several apps available at Google Play which make use of this. A few examples include: 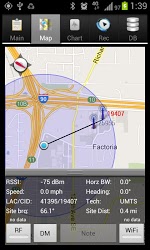 OpenSignal (first image). Here the compass gives you the direction to the cell tower. The app has additional features as well, e.g. it can plot cell towers and WiFi APs. My favorite in this area however is RF Signal Tracker, which has comparable features. It can show you on a map in live-mode cell towers you have been recently connected to (including those you are connected to currently) and their coverage (measured while you've been connected to them). You can import your own cell data in CSV format, or export existing ones to edit them and re-import). If you were in logging mode, you can even export a nice KML to see results in Google Maps or Google Earth, or simply re-play the recording. Another nice feature is the list of "neighbors", where this app logs when a connection was handed over from one cell to another.

There are several more apps having comparable features, so you might want to check the "related" sections on their playstore pages to find the app best fitting for your purpose.

Every cell phone transmission tower has a location area code and cell id. There are many apps in Google Play Store that can report these two parameters of the tower that the phone is presently connected to. This is likely to be the nearest (on the same network), but isn't necessarily. With these data, you can visit Cell2GPS and find its latitude and longitude and locate in a map. There are also apps that can do this as well.

On most non-Samsung phones you can dial number

and get a detailed report of the cell tower including in some cases for CDMA towers the actual Latitude and Longitude:

For other towers mapping is more complicated. Some tools like OpenSignal give general information. For hunting down an actual tower location, CellMapper is the one with the right tools:

You can create request to Public API (source) if you have mobile cell information that you are currently connected. Most of the time current cell is physically nearest to you. But if you need to find the nearest tower to you you have to request all the cells that you currently see (neighbours cells) and then chose the nearest cell to you.

Not the answer you're looking for? Browse other questions tagged geolocation cellular-radio .

16
How does Android get the coarse location?
15
How to display cell info display (CID) on screen?
3
Is there a way to get GPS to work without Google Location Service constantly enabled?
3
I cannot find my current location while offline in google maps
2
Can you use cell tower triangulation without a SIM card?
7
Display Name of Connected Cell Tower
1
Is it possible get caller’s cell tower information?
0
Can a android device really connects to Satellite using when LocationMethod set to "Phone Only"?
1
Can I improve accuracy of Google Location while hiking